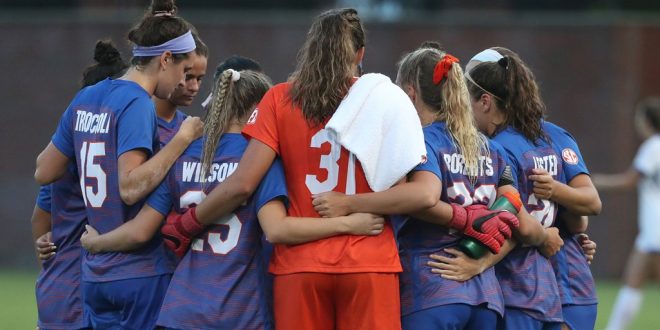 Gators Soccer Heads to Alabama for Meeting with Crimson Tide

The Florida soccer team started off conference play strong (2-1-1), but has since dropped to 2-3-1. This weekend, the Gators might be able to break even in the SEC. The team will head to Alabama (1-5 SEC) in an attempt to finish the season strong.

Florida’s history as an upper-crust program led the team to schedule elite this season. However, eight ranked opponents, coupled with injuries in important positions and developing youth is putting the Gators in a tough position.

Alabama will be Florida’s 19th game of the season. Through 18 games last season, the Gators only lost four matches. This season, they’ve only won four in the same timespan.

The team has shown flashes of excellence at times. For example, Florida routed Kentucky in a six-point shutout behind a hat trick from senior Lais Araujo. The Gators used that momentum to come out on top over LSU just one week later. But since then, the team has one draw and two losses to its name.

A motivator for the Gators could be the fact that Alabama is thirteenth in the SEC, with a measly 1-5 conference record. The Tide’s only win was a one-point decision over Kentucky (0-6 SEC). But, just like Florida, Alabama sees a win on Sunday as a necessity.

Alabama’s overall record is 7-7-1. However, cupcake opponents during nonconference play skew the Tide’s record favorably. Something the Gators have on their side is experience playing five teams that have held top ten rankings at one point. Three of those four teams even ranked in the top three.

Losing to some of the best teams around is sometimes a bit of a mixed bag. Taking an L is never fun… especially to a competitive team like Florida. But, consistently putting up strong fights against these teams makes a difference when taking on a team that hasn’t played on that level at all during the season.

This Sunday’s match is in Tuscaloosa. But any Gators fans who want to support the team can tune into ESPNU or Gatorvision radio. Kickoff is set for 5.