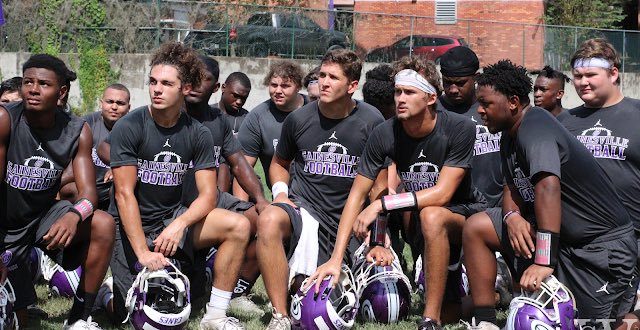 The Gainesville Hurricanes will face the Vanguard Knights in a district game this week. The Hurricanes are 4-2 overall and 2-0 in district play while the Knights are undefeated.

Canes Are Coming Off a Tough Loss

“It was just one of those nights where we could not put anything together as a team,” GHS Head Coach Patrick Miller said.

The Hurricanes are coming off a crushing 27-7 loss last week against the Buchholz Bobcats. Canes coach Patrick Miller reflects on last week’s game and says the team was not playing to its fullest extent.

GHS quarterback Luke Matthews struggled throughout the entire game completing 14 of 25 for 142 yards with only one touchdown and two interceptions, including one in the end zone before halftime. In addition, the Canes had just 37 rushing yards. However, before the team left Citizens Field on Friday night, Miller reminded the team that this week’s game is far more important.

Miller said the team experienced a hard Monday practice especially after he reviewed the film. But Tuesday’s practice was focused on creating a game plan to get ready for this week’s challenge.

But Miller does not look just at the seniors for leadership.

“It’s not just the seniors. The younger guys have to hold up their end of the bargain,” Miller said.

Miller hopes the team will work more efficiently together on Friday.

The Knights are coming off a bye week and have had a stellar season with a perfect 6-0 record. Historically, Vanguard has come out dominant in this matchup as they have won the last four games against the Canes. Friday’s game is huge for both teams: the winner of this matchup will be on track to claim the district title. Also, this game will be an important indicator for playoff seeding.

Miller gives his thoughts on Vanguard.