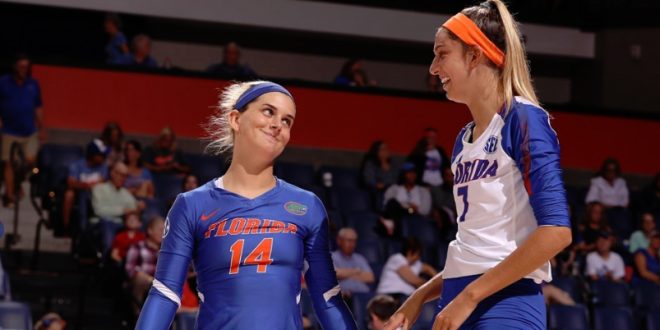 Florida is back on the road after a pair of five-setters at home in the O’Connell Center.

Meanwhile, Florida will face a team looking for its first win over the Gators since 2006.

In addition, they rank in the top five against conference opponents in both hitting efficiency (fifth with .242) and opponent’s hitting (fourth with .193).

Although, they did surrender a .402 percentage at Missouri on Oct. 5. They are also being out-blocked and out-dug in their last five matches.

Another day of work and another day closer to Friday night, back in front of our fans in the CVC! pic.twitter.com/YraAtjdOEC

The Gamecocks went 9-0 in the month of September. Furthermore, they started conference play winning five of their first six matches, including four consecutive wins over the first four matches.

Here are some players to watch for South Carolina:

She recorded 17 blocks and 14 kills in Florida’s two matches last weekend, including a career-high 12 blocks against Georgia.

Appropriately, Kellum sits in the top 10 in the conference in hitting percentage and blocks.

Mary Wise said it was interesting to see her be recognized for her defense because of how well she’s played for the Gators offensively.

“She has a really good understanding of her game, how she can affect the game and helps us in the three rotations on the court,” Wise said.

Kellum on the honor:

She said her defense was something she wanted to work on going into Georgia. Kellum gave credit to her teammates for helping her improve her game.

Florida’s outstanding freshman outside hitter will be making her return to the Palmetto State.

She is the team’s leader in kills at 219. Her first five matches were all double-digit kill performances for her, including three matches with 20.

Back Home on Sunday

Florida will return to the O’Connell Center for a rematch against the Alabama Crimson Tide.

Previous Colombia Dominates U.S. in Friendly Win in Tampa
Next Donovan Stiner: From the Outhouse to the Penthouse