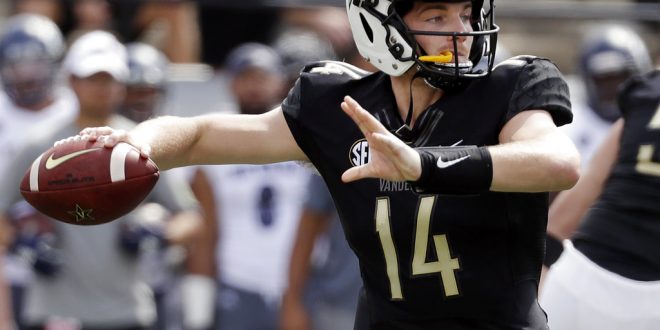 FILE - In this Sept. 8, 2018, file photo, Vanderbilt quarterback Kyle Shurmur passes against Nevada in the first half of an NCAA college football game, in Nashville, Tenn. No. 2 Georgia will look for more consistent production than it managed the last two weeks against Missouri and Tennessee when it puts its perfect record on the line against Vanderbilt on Saturday night. (AP Photo/Mark Humphrey, FIle)

The schedule for the Vanderbilt Commodores doesn’t get much easier this week with the No. 14 Florida Gators coming to town.

Vanderbilt was thrashed 41-13 by second ranked Georgia last weekend, a week after they struggled with Tennessee State. The defeat to UGA dropped the Commodores to 3-3 on the season and 0-2 in the SEC.

However, Head Coach Derek Mason sees some positives heading into the back half of the season.

Vanderbilt started off the 2018 season with plenty of promise. After starting 2-0, the Commodores went into South Bend, Indiana and gave the Notre Dame Fighting Irish a scare. Vandy would lose 22-17, but it turned heads in the SEC that the Commodores could be a threat.

Since then, Vanderbilt has dropped two of their last three. South Carolina handed the Commodores their first loss of the season 37-14 and since then, it’s been a struggle for Derek Mason’s team.

It took a fourth-quarter comeback to beat Tennessee State at home 31-27, but the loss to Georgia has Vandy reeling. They’ll be looking to bounce back against the Gators this weekend.

Production from the veterans

The Commodores are getting production this season from their upper-classman. Senior quarterback Kyle Shurmur has started since the end of his freshman season and is putting together a solid senior campaign. The Philadelphia native has thrown for 1,400 yards and nine touchdowns while only throwing four interceptions.

He has plenty of help on the outside as well. Junior receiver Kalija Lipscomb has recently been named to the Biletnikoff Award Watch list and leads the team in yards, 496, and touchdowns with six.

Throw in the running of redshirt junior tailback Ke’Shawn Vaughn, who’s racked up 439 yards and five scores, and the elders of Vanderbilt are producing for their team.

Recent success against the Gators, kind of

Florida has been a team that Vanderbilt has given fits in recent years.

Two of the last three contests between the Commodores and Gators have been decided by a touchdown or less. in 2015, Florida snuck out a 9-7 win and did the same in 2016 13-6. The lone exception was in 2017 where the Gators won 38-24 but held only a one touchdown lead late in the fourth quarter.

However, this Gator team will pose the biggest test for the Commodores in recent years. Florida is coming off an adrenaline packed win over then number five LSU and is riding a wave of momentum heading into this week.

Coach Mason knows he must prepare his team for all aspects of the game, as Florida is formidable on all three sides of the ball. Florida head coach Dan Mullen has dug deep into his playbook the past two weeks, utilizing trick plays. Coach Mason is aware of the challenge that poses.

Kickoff is set for noon on ESPN. 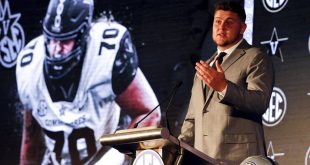 Looking to bounce back from a 0-9 season, Vanderbilt has a fresh start with Head …