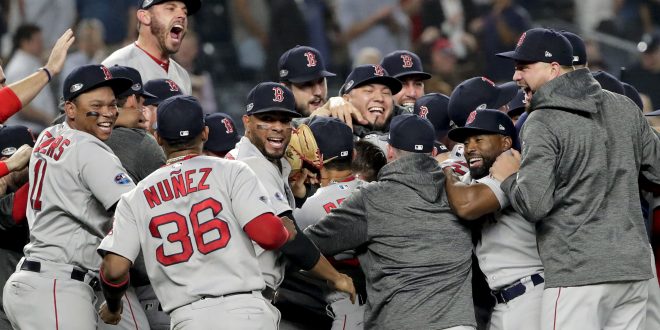 Boston Red Sox are ready for the ALCS

After being eliminated in the Division Series for the past two seasons, the Boston Red Sox are back in the ALCS. They did it by taking down the New York Yankees no less, in a series that ended 3-1 for the Red Sox. Boston now takes on the reigning champions, Houston Astros, in a rematch of last years ALDS matchup.

The Red Sox ended the regular season with the best record of any team in the MLB, 108-54. These 108 wins set a club record and gave them home-field throughout the postseason. Boston also has a great record at home, 57-24, again the best in the MLB.

In the past two years, the Indians and the Astros eliminated them in the ALDS. In both matchups, they fell 0-2 and did not have home-field advantage. But this year, the Red Sox hope to make use of the advantage of play at Fenway Park.

Improving off of ALDS

The Red Sox disappointingly dropped Game 2 to the Yankees in Boston. But then they traveled to New York and put on a spectacular display defeating the Yankees 16-1 in Game 3. Game 4 proved to be more nerve-wracking as they had to wait until the bottom of the ninth to solidify their spot in the ALCS with a 4-3 win.

While they did perform to their expectations, the Red Sox did have some nervous moments in this series, and some aspects they’ll look to improve for their series against the Astros. Closer Craig Kimbrel struggled a bit in his two appearances, giving up 3 runs. Starter Eduardo Rodriguez also gave up three runs, and Brandon Workman looked a bit shaky in his appearances.

In addition, the Red Sox are hoping to see improvement in Mitch Moreland who injured his right hamstring last Saturday in Game 2 of the ALDS. His availability for Game 1 against Houston is still uncertain, and manager Alex Cora might be waiting till the very last minute to name a roster.

A lot has changed since the Red Sox faced the Astros last year in the ALDS. Chris Sale is set to start for the Sox in Game 1, and he’ll face a pitching matchup against the Astros’ Justin Verlander.

Last year, Sale had somewhat of a disastrous series against Houston. In Game 1, he gave up seven runs in an 8-2 loss to the Astros, including home runs by Alex Bregman and Jose Altuve. In his only other appearance of the game, Bregman tied the score 2-2 in Game 4 and then Houston took the lead.

But Sale believes that the past two years have served as a learning experience for this moment. Sale started Game 1 against the Yankees sailing through five innings with little trouble. In Game 4, he came on with a perfect inning, helping the Red Sox shut down the Yankees and move on to the ALDS.

Sale is looking to put the ghosts of last years series against Houston past him, with a much improved season with the Red Sox. The Astros Manager AJ Hinch even believes that Sale will bounce back, and provide a tough opposition in the diamond.

This monster series will see two 100+ winning teams face-off in the ALCS for the first time since 1977. The Boston Red Sox will host the first two games before the series shifts to Houston for Game 3 and 4.