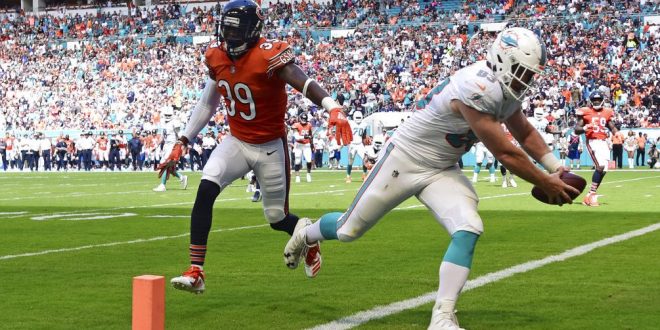 The Miami Dolphins defeated the Chicago Bears 31-28 in a wild game that came down to a field goal in the final seconds of overtime.

With backup quarterback Brock Osweiler under center, the Dolphins made good use of their many offensive weapons.

Osweiler was filling in for starter Ryan Tannehill who sat out due to a shoulder injury. And his showing shocked viewers. The former Denver quarterback threw for 380 yards and three touchdowns.

Osweiler said he went into Sunday’s game with one outlook.

After the age of 30, most NFL running backs decline in their production. Not Gore. He rushed for 101 yards and caught an 18-yard reception on Sunday.

Frank Gore looks faster, quicker and fresher than anyone on the field right now. And that’s crazy. He’s 35. In this sport.

Gore’s performance on Sunday was notable. The veteran running back became the sixth player in NFL history age 35 or older to rush for 100+ yards in a game. He is now averaging 4.9 yards per carry this season, his highest rushing average since 2009.

Albert Wilson is Proving to Be an Asset

Going into the season, many thought Wilson would be a fourth option receiver at best. They were wrong. The 26-year-old quickly became one of Osweiler’s favorite targets, scoring two of Miami’s touchdowns.

This is the Albert Wilson show. Ended the day with 6 receptions & 155 yards. Here’s 3 of his catches. pic.twitter.com/rEDE5SpINV

Wilson’s had four touchdowns so far this season, already surpassing his career best. Signing him during the offseason is beginning to pay off for Miami.

Nick O’Leary, the grandson of golf legend Jack Nicklaus, had his first catch and first touchdown as a Dolphin. The tight end was promoted to Miami’s 53-man roster last week after sitting on the practice squad for about a month.

“He does a good job with both run [and] pass protection and what our game plan was,” head coach Adam Gase told the Palm Beach Post. “The tight end was not going to be involved as much and Mike [Gesicki] knew that going into the game and we probably thought we were going to go a little more two-tight end personnel. But it didn’t go that way … we were able to do a lot of things with him in there.”

Nicklaus took to Twitter to show how proud he was of his grandson’s performance.

No one’s certain if O’Leary’s going to become a top tight end for the Dolphins, but he appears to be on his way.

Camille Woodhouse is a Sports and Media student at the University of Florida College of Journalism and Communications. In the past, she has covered the Atlanta Falcons and Florida Gators football for various sports news outlets. She is an Atlanta native and a fan of football.
@CJW_SportsRadio
Previous Patriots, Steelers Make Statements With Convincing Wins
Next Gator Soccer Plays to Scoreless Draw at Alabama