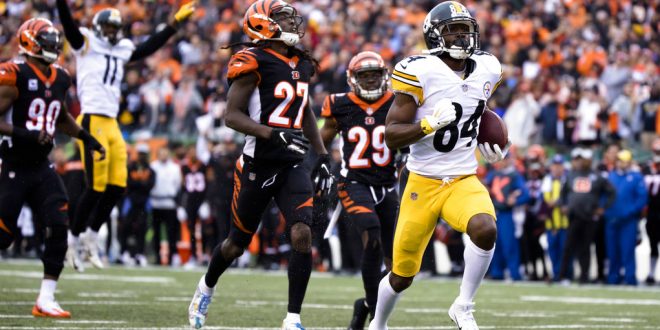 Pittsburgh Steelers wide receiver Antonio Brown (84) runs for a touchdown in the second half of an NFL football game against the Cincinnati Bengals, Sunday, Oct. 14, 2018 in Cincinnati. The Steelers defeated the Bengals 28-21. (Albert Cesare/The Cincinnati Enquirer via AP)

Star running back Le’Veon Bell’s contract dispute to start the year noticeably handcuffed the Steelers. Quarterback Ben Roethlisberger didn’t have that same check-down option he once did, and the run game wasn’t as strong without Bell. It took back-up running back James Conner a few games, but it has become clear that the cancer survivor is a more than adequate option to fill Bell’s shoes.

Despite this, the Steelers lost to the Ravens on Sunday night two weeks ago as they were shut out the entire second half. With a big match-up against their division rivals, the Cincinnati Bengals, on Sunday, this would be their biggest game of the young season.

The Bengals came in 4-1 and looking to take full control of the division lead on Sunday, and the Steelers stood in their way. As the Steelers stepped onto the field, they recalled the last time they were there.

It was last year when linebacker Ryan Shazier was brutally injured to the point where he couldn’t move his legs. He has since gone through therapy and is able to walk again. Shazier was on the sidelines as they kicked-off on the field where his career may have come to an end. He rallied his team before the game, and that energy continued throughout.

The Steelers trailed 21-20 with 15 seconds to go. Antonio Brown promptly dashed across the field for a 31-yard game-winning touchdown. The final score was 28-21. This was a huge win for the Steelers. Not only do they keep pace in their division, but show that they can still compete at the elite offensive level that led them to so many division titles in the past.

Tom Brady is 41, the Patriots passing offense has been inconsistent at best this year, can the Patriots perform at the level they once did? After Sunday night’s game, the answer is a resounding “yes.” It was a new school versus old school as the Patriots took on the Kansas City Chiefs, and their explosive quarterback Patrick Mahomes. The Chiefs came in 5-0, and many questioned Brady’s ability to keep up with Mahomes’ scoring ability. Brady reminded everyone that he is still the “GOAT” with a 340-yard performance, throwing for a touchdown and running for one. The Patriots edged the Chiefs 43-40 and improved to a 4-2 record.

In this key victory, the Patriots showed that they can still beat the best teams in the league with Tom Brady. While doing this, they also show a different aspect that they haven’t had in a while, a run game. Rookie running back Sony Michael had two touchdowns and 106 yards, the third straight game he has achieved 100 or more yards. This running game will not only balance the Patriots offensive attack but will also keep Brady fresh down the stretch. It appears that the Patriots are just as dangerous as ever before.