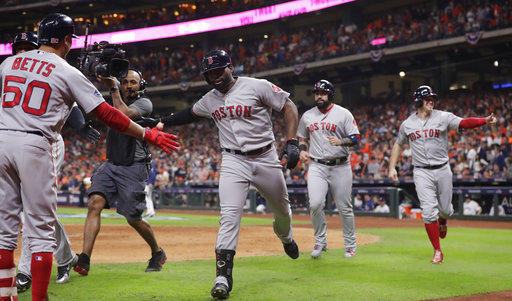 The Boston Red Sox defeated the Houston Astros by a score of 8-2 to reclaim home-field advantage in the ALCS.

Closer Than it Seems

An 8-2 score in an MLB postseason game would lead some to believe the game was a blowout. However, this match-up was closer than the score would indicate. The first inning was action-packed. Boston put up a quick two runs in the top of the frame behind RBIs from J.D. Martinez and Xander Bogaerts. Mookie Betts got the Sox rolling early with a lead-off single and was the one to score from Martinez’s RBI double.

The Astros responded with one run in the bottom of the first inning when Jose Altuve scored off Marwin Gonzalez’s RBI single. From there, it was a defensive duel until the 5th inning. Astros pitcher Dallas Keuchel settled in after a rocky start and held the Red Sox to just one hit until he was relieved after the fifth inning. For the Red Sox, Nathan Eovaldi had a nice outing against an explosive Houston offense with 6 IP, 2 runs allowed and 4 strikeouts. Boston Manager Alex Cora praised Eovaldi’s performance to the media.

When the fifth inning, came around the Astros were able to tie the game up with an RBI double from Alex Bregman. From there, however, it was all Boston.

In the 6th inning, Red Sox first baseman Steve Pearce broke a tie game with a solo shot to the left stands.

With a slim 3-2 lead heading into the eighth inning, the Red Sox put the game out of reach. Houston Pitcher Roberto Osuna hit two consecutive batters and walked in one run, giving Boston a 4-2 lead. Then came the play of the game. With two outs and the bases loaded, Jackie Bradley Jr. sent a moonshot to right field. The grand slam put the Red Sox up 8-2, a lead they would never relinquish.

Here’s what Bradley Jr. had to say about his huge grand slam:

Taking Game 3 on the road was absolutely huge for the Red Sox. They are now up 2-1 on the defending champs and have a chance to take a 3-1 series lead. It won’t be easy, however. The Astros are a resilient and extremely talented team. Manager A.J. Hinch said that his club will be ready for Game 4.

The Astros and Red Sox will play Game 4 Wednesday night in Houston at 8:39 p.m. ET.

Previous Jaguars look to regroup after disastrous game against Cowboys
Next Celtics, Warriors Pick Up Wins on Opening Night