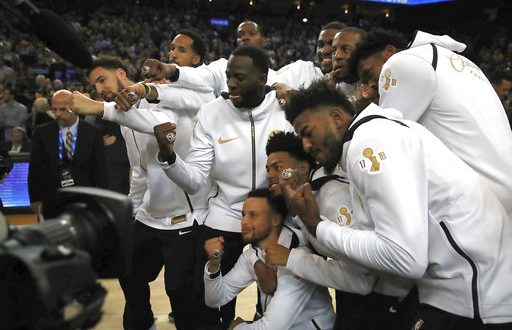 The Golden State Warriors celebrate after receiving their championship rings after an awards ceremony to recognize the team's NBA championship prior to a basketball game against the Oklahoma City Thunder, Tuesday, Oct. 16, 2018, in Oakland, Calif. (AP Photo/Ben Margot)

The Boston Celtics and Golden State Warriors both started out the 2018-19 NBA season 1-0.

It was an energetic start for the Celtics and the fans at TD Garden. From start to finish, the team fed off the crowd’s energy against the rival 76ers. The Celtics were just too much for Philadelphia. After a 21-21 first quarter, Boston went on to outscore the Sixers in the 2nd, 3rd and 4th quarters. The Celtics had 21 assists, 55 rebounds, seven steals and six blocks as a team. Their aggressive defense held the Sixers to 39.1 percent shooting and just 5-26 on three-pointers.

Kyrie Irving and Gordon Hayward made their return from injuries that ended their 2017-18 seasons. Irving missed the last 22 games of the regular season and the playoffs. Hayward missed 81 games after his horrific injury in their season-opener last year. Both players are finally healthy now and the TD Garden gave them a warm welcome.

This was Hayward’s debut in Boston as he got injured in his first game as Celtic on the road in Cleveland last year. It was a difficult journey of recovery for him, which made this game such a special moment for him and the Celtics.

What a feeling! Thank you Boston for the tremendous support. We’re just getting started! #CUsRise pic.twitter.com/RQJVzrWjcP

Both Gordon and Kyrie showed signs of rust, combining to shoot just 6 of 26 from the field. Irving finished with 7 points and 7 assists while Hayward had 10 points, 5 rebounds, and 4 steals.

Kyrie on his return:

Tatum Puts on a Show

Jayson Tatum looked like a star in the season debut. He carried the Celtics’ offense at times and scored whenever the team needed him to. The sophomore, who could be in for a huge breakout season, put up 23 points on 9-17 shooting along with nine rebounds, three assists and a steal.

Jayson Tatum looked like he was in mid-season form during our 105-87 victory over the Sixers. pic.twitter.com/mjw8YEPloH

The Golden State Warriors defeated the Westbrook-less Thunder 108-100 to open up their quest for a three-peat.

Dubs Get Their Rings

The defending champions held their 2018 championship ring ceremony right before they took the court against Oklahoma City. It was a quick moment of celebration before they officially began the new season.

Thunder Put Up a Fight Without Westbrook

The Thunder were missing former-MVP Russell Westbrook after he had arthroscopic knee surgery on September 12. Still, the team put up a fight against the star-studded Warriors. Paul George, Steven Adams and Dennis Schroder led the Thunder, who were within two points with under two minutes remaining in the game. George had 27 points, five assists and four steals. Schroder, who was starting in Westbrook’s place, put up 21 points, nine rebounds and six assists. Adams had 17 points to go with 11 boards and four assists.

Durant and Curry Too Much for OKC