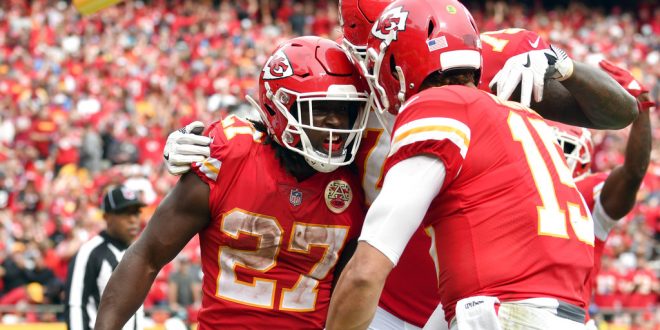 FILE - In this Oct. 7, 2018 file photo Kansas City Chiefs running back Kareem Hunt (27) celebrates his touchdown against the Jacksonville Jaguars with quarterback Patrick Mahomes (15) during the second half of an NFL football game in Kansas City, Mo. The Cincinnati Bengals bring one of the NFL’s worst defenses to Arrowhead Stadium on Sunday, Oct. 21, 2018 to face the Chiefs. They also bring an ailing defense, and that should only make it tougher to slow down Patrick Mahomes and Co. The Bengals are coming off a loss to Pittsburgh while Kansas City lost for the first time last week in New England (AP Photo/Ed Zurga)

NFL week 7 will feature three marquee match-ups to look forward to watching. The first game we can look at will be the New Orleans Saints versus the Baltimore Ravens. The second game will feature the Dallas Cowboys against the Washington Redskins. The Sunday Night match up will be a highly anticipated game with the Cincinnati Bengals against the Kansas City Chiefs.

Future Hall of Fame quarterback Drew Brees has never beaten the Baltimore Ravens in his career.

Reporters asked him if that bothers him and here is his response:

Both teams will come into the game with four wins on the season battling for the fifth win. Baltimore has a very talented defense that will look to get after an explosive Saints offense. With both teams battling injuries it will be key for either team to get an early start on a road to victory.

The game will kickoff at 4:05pm on FOX

America’s favorite team against America’s capital. The Redskins and Cowboys is a much anticipated matchup for the NFC East. Both teams come in with three wins and the fourth win could put either team atop of the division. Dallas comes in with speculation about linebacker Sean Lee’s status, a crucial part of the Cowboys defense.

Quarterback Dak Prescott will look to get the team going Sunday on the road after a 3-touchdown game performance. The quarterback of the Redskins, Alex Smith, is a newcomer to rivalry and will look for a 1-0 start in the matchup.

He talks about the preview of the matchup here:

The game will kickoff at 4:25pm on CBS

Patrick “Showtime” Mahomes looks to rebound his Chiefs after losing their first game of the year last week. The Chiefs come in at 5-1 and the Bengals come in at 4-2, with both teams being on top of their division.

Previous Milwaukee Tries to Dodge a Second Round Exit: NLCS Game 6 Preview
Next Bucs look to get back on track vs. Browns 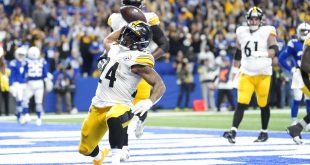