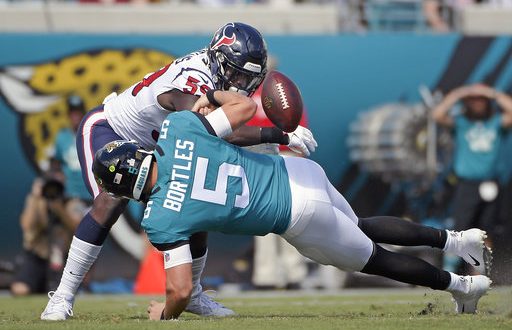 It seems as though all three of the NFL teams have one thing in common and that is the need for adjustments.

Head Coach Doug Marrone said he agrees with Bortles attitude after being benched.

When asked about being benched, Bortles said after the second fumble, Doug Marrone knew that Cody was going to go in.

“I have to take care of the ball, give us a chance to score points to win, or at least punt it to try to change field position. I didn’t do that, so they made changes.”

Bortles said in hard times like this he will do what he has always done his entire life, keep his “head down and keep working.” He said the only thing to do in this situation is  show up with a positive attitude and get ready to play next week. Whether he plays next week or not is not his decision, but he will be ready to go.

Bortles will started on Sunday against the Eagles.

"I spoke to both quarterbacks this afternoon and told them that Blake will be our team's starting quarterback. I believe this gives us the best opportunity to win." pic.twitter.com/eDXVHtUrTf

Middle linebacker Kwon Alexander went down on Sunday against the Browns with a knee injury. An MRI performed on Monday confirmed a torn anterior ligament in his left knee, ruling him out for the remainder of the season.

The Bucs have been dealing with a numerous of injuries as backup linebacker Jack Cichy also suffered a season ending knee injury.

Head coach Dirk Koetter said Alexander was the heart and soul of their defense and everyone was emotional during halftime.

Linebacker Lavonte David said despite the disheartening events for the Bucs, guys have to have the next-man-up mentality.

Following the game Sunday against Cleveland, David said that the guys stepped up and filled the void.

Adam Gase said he has to find out what’s going on with injuries and see who is available.

Despite the short week, he said, “we will figure something out, and we will have enough guys to be ready to go.

The latest injury report ahead of #MIAvsHOU

Kevin Smalls is a fourth year journalism student on the sports and media track from Jacksonville, Florida. He aspires to be a sports writer on the high school and collegiate level. He is currently taking courses at the University of Florida in the sports writing field to learn what it takes to be a sports writer. He writes web stories for ESPN Gainesville. He also informs the public of local, state, and national on sports trending for ESPN Gainesville.
Previous The Boston Red Sox Prepare to Take Game 1 of the World Series
Next Los Angeles Dodgers Return Trip To The World Series