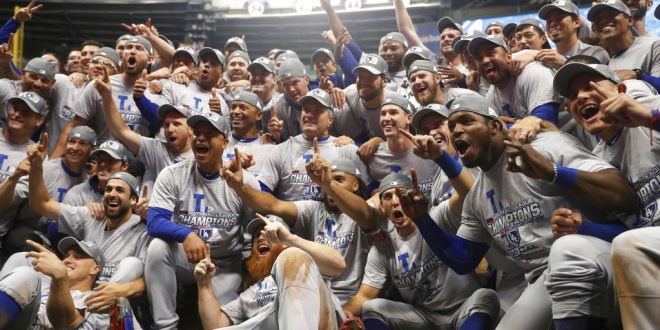 About a year ago, the Los Angeles Dodgers were in a similar position. They were preparing for the first game of the 2017 World Series against the Houston Astros and their inspiring run to the championship round.

The circumstances are different now.

Los Angeles is making a return appearance as NL Pennant winners, the first team to do so since the 2008-09 Philadelphia Phillies, and is looking to avenge the loss suffered last year in Dodger Stadium. The Dodgers will face MLB’s best in the Boston Red Sox and begin in enemy territory.

Where The Dodgers Started

Before the regular season began, Los Angeles was favored 8-to-1 to win the World Series this year. With a championship on their mind, the Dodgers set out on their 2018 schedule. They opened with two losses to NL West-rival San Francisco Giants and finished the first month of the season at 12-16.

The month of May featured more of the same, as they finished 26-30 but improved towards the end with a few small winning streaks. At the All-Star Game break, the Dodgers were 10 games over .500 and leading the division by half a game over the Arizona Diamondbacks.

The second half of the season included a few winning streaks and periods of inconsistency. And it was a battle toward the end with the Colorado Rockies pushed them for the division crown. The Dodgers came out on top and earned a spot in the postseason, finishing with a 92-71 record.

Los Angeles may not have reached the 100-win plateau this season, but they are back competing for a title once again.

Path To The World Series

The road the World Series started with an NLDS matchup against the young 90-72 Atlanta Braves. The Dodgers belted out 14 home runs and took down Atlanta in four games to advance to the NLCS.

Their next series took a bit longer to decide. The Milwaukee Brewers, the Dodgers’ new opponent, entered the series coming off a three-game sweep over the Rockies. Milwaukee would take the first game at home, 6-5, but Los Angeles took Game 2, 4-3, on the road. The series would go all seven games and end with Clayton Kershaw striking out Mike Moustakas to clinch the series.

Cue the dogpile on the mound inside Miller Park.

Relive the final out of the @Dodgers' #Game7 victory via #ClinchCam! pic.twitter.com/MwbHpaDXI8

On the Dodgers side, a few key players could be the difference in their attempt to win the series. In terms of pitching, Kershaw has earned two wins, notched a 2.37 ERA and allowed a .169 batting average against opposing hitters (lowest among the team’s starters). The 38-year-old Ryan Madson has the next lowest ERA at 1.42 and has allowed an opponent average of .240 through seven games.

And on the hitting side of things, the Dodgers have multiple weapons in their lineup, including right fielder Yasiel Puig, third baseman Justin Turner and shortstop Manny Machado.