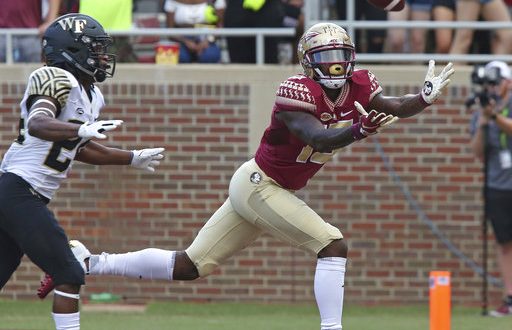 Florida State's Tamorrin Terry made this reception in the end zone but the play was annulled by a penalty in the second quarter of an NCAA college football game against Wake Forest, Saturday, Oct. 20, 2018 in Tallahassee, Fla. Florida State won 38-17. (AP Photo/Steve Cannon)

College football around the state of Florida

With week 9 of the college football season upon us, this weekend features several games that will impact the rankings, especially with the first College Football Playoff rankings being released this coming Tuesday.

The Miami Hurricanes travel up north to Boston College in a Friday night ACC matchup. The Hurricanes are coming off a close loss to Virginia, Miami’s first loss since their opening weekend defeat against LSU.

Both teams come into the game with a 5-2 record (2-1 in conference play) as each look to pick up a much-needed win. Boston College will lean on top rusher A.J. Dillon who averages more than six yards per carry. Running the ball should be tough for Boston College though as the Hurricanes’ defense gives up just 3.8 yards per play which is second in the nation only to Michigan.

This game isn’t what it used to be in recent years as the winner has represented the ACC Atlantic Division every year from 2011-2015. Nonetheless, this game is still important to both teams as Clemson looks to stay undefeated and secure a CFP spot while Willie Taggart looks to get his first signature win as head coach of the Seminoles.

Junior quarterback Deondre Francois will need to step up if the Seminoles are to pull off the upset as Clemson leads the nation in defensive efficiency. A loss for the Tigers would pretty much ruin the chances of an ACC team getting into the playoff but would be a miraculous win for the Noles.

The undefeated South Florida Bulls travel to Houston to take on the Cougars in a marquee American Athletic Conference matchup. USF has had a tendency to be in close games with teams they should be running all over. They beat East Carolina, Tulsa and UConn by a combined 16 points. If they fall behind early on Saturday, they could be in trouble.

Even with potential top draft pick Ed Oliver, Houston has been abysmal on defense as they give up an average of 489 yards per game. The Bulls have thrived in the run game and should continue to do as they look to feed the ball to Florida transfer Jordan Cronkrite who averages just under eight yards per carry.

Previous London Calling: Jaguars face off with Eagles across the pond
Next Florida-Georgia Preview: Dan Mullen’s Turn Around Puts Florida in a Good Position to Face Georgia 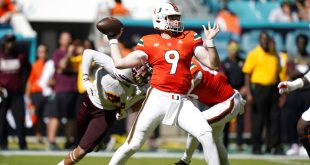