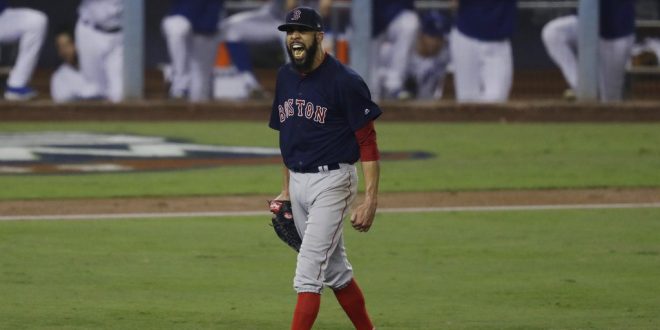 After a career that had been defined up to this year by failure in the postseason, David Price exorcized all of those October demons this World Series.

In two starts, both Red Sox wins, Price gave up just six hits and three earned runs to go with 10 K’s in 13 innings of work.  Price started the closeout games in each of the last two series for the Red Sox, both on the road, dating back to the Game 5 ALCS win in Houston (6 IP, 0 ER, 3 H, 9 K’s). The spotlight that Boston had been paying Price to perform under finally stopped being too bright for the stud lefty.

It’s a remarkable turnaround for a pitcher who started off this postseason much like his other playoff starts in a Red Sox uniform.

He took the mound in Game 2 of the ALDS against the Yankees. At home, he lasted just 1.2 innings, giving up two home runs and three earned runs on ten hits. Price, already an unpopular figure in New England because of spats with the media and lack of playoff production, seemed on his way to cementing himself as the only villain of the team with the best record in baseball (108-54) and the odds-on favorite to win the title.

Instead, as soon as Boston flipped it’s attention to Houston for the ALCS, Price seemingly flipped a switch too.

In Game 2 in Boston, with the Red Sox down 1-0 in the series, Price gave the Red Sox what they needed. He lasted 4.2 innings, giving up five hits and four earned runs. While he was pulled one out away from being eligible for his first postseason win as a Red Sox player, the performance seemingly put him on the path to showing his regular season form.

And he did just that. He went 3-0 in his remaining postseason starts as Boston went 8-1 in its last nine games of the 2018 postseason. Price returned to prime form as the Sox returned to the form that saw them as one of the most dominating pitchers and teams in the majors.

That was all highlighted Sunday night. After giving up a leadoff home run to David Freese, Price dominated, giving up just two hits and two walks the rest of the way, keeping a desperate Dodgers lineup at bay and Dodgers fanbase silenced.

“He’s been locked in for a while and I’m very proud of him,” Boston manager Alex Cora said. “There’s a lot of people that gave up on him throughout the season, but we knew that he’s one of the best pitchers in the big leagues and he cares and he wants to win. Finally he got his World Series win.”

So now the Red Sox will cue the duck boats and have their fourth parade in 15 years on Wednesday through downtown Boston.

And while the main celebration is that of a historic, franchise-best season, it’s also, for Price, a celebration of a getting the proverbial October monkey off of his back.

“I always had belief in myself and in my abilities and to be able to come through, you know, on this stage and in October, for myself and my teammates,” Price said. “I know I can do it now, and that’s always a good feeling to have. It’s just good to know.”