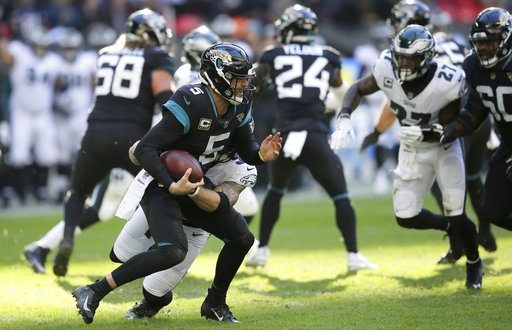 Jacksonville Jaguars quarterback Blake Bortles (5) is sacked during the first half of an NFL football game against Philadelphia Eagles at Wembley stadium in London, Sunday, Oct. 28, 2018. (AP Photo/Tim Ireland)

“It’s frustrating,” Jaguars QB Blake Bortles expressed after his team’s 24-18 loss in London. “I’m not mad at anybody. I’m not mad at myself. I get frustrated with everybody, and myself included when we don’t do the things I know we can do.”

The Jacksonville Jaguars continue to struggle as they lose their fourth consecutive game to the defending Super Bowl Champs, the Philadelphia Eagles, on Sunday. The Jags were across the pond in London, England where they fell 24-18.

With this loss, the Jags are now 3-5 on the season. But the team enters their bye week, which could help them regroup and prepare for their next game on November 11.

Now, the Jags are ranked third in the AFC South standings behind the Houston Texans (5-3) and the Tennessee Titans (3-4).

The game got off to a solid start for the Jags when defensive tackle Marcell Dareus sacked the Eagles QB Carson Wentz in the first few minutes of the game, which resulted in a fumble for the Eagles. This mistake allowed the Jags to gain possession and help them get into scoring position.

The Jags worked their way down the field but were unable to get a touchdown. So, they settled for a field goal and were first on the board. Late in the first quarter, another Eagles blunder helped the Jags. A pass that was intended for Philadelphia’s Josh Perkins was intercepted by Jalen Ramsey. Even though the Jags weren’t able to score on this possession, it still kept the Eagles off the board.

Philadelphia came back at the beginning of the second quarter and retaliated with a field goal of their own, which tied up the game at three apiece. Jags gained possession and again were not able to get a TD so again they needed to settle for a FG. Kicker Josh Lambo was put to the test and successively kicked a career-long 57-yard FG. This put the Jags up 6-3.

Then things started to get rocky.

With less than two minutes until halftime, the Jags fumbled the ball and it was recovered by Philadelphia’s Malcolm Jenkins. This gave the Eagles an edge and they took advantage of the Jags mistake. Just before the clock ran out, the Eagles scored a touchdown and took the lead. The score heading into halftime was 10-6.

Coming out of halftime, things got worse for the Jags. The Eagles scored early in the third quarter, which extended their lead to 17-6. The Jags tried to play catch-up and were able to get a TD, but failed on their two-point conversion.

.@JoshLambo's 4th FG of the day brings it back to a 1-score game.#PHIvsJAX | #DUUUVAL pic.twitter.com/ogAfKRTmE9

As the game progressed, a powerful play by the Eagles defense only allowed the Jags to score on two Lambo FGs. In the end, the Jags couldn’t regain the lead and tacked on another loss. Final score at Wembley Stadium was 24-18.

“I gotta do a better job with the players,” head coach Doug Marrone said after his team’s fourth consecutive loss on Sunday. “It starts with me.”

The Jags enter a bye week and will be back in action on Sunday, Nov. 11, when they travel and face another AFC South rival, the Indianapolis Colts. Currently, both teams have the same overall record at 3-5.

Will the Jags snap their four-game losing streak? Or will the Colts be victorious and surpass the Jags in the standings?

Kick-off for this matchup is set for 1 p.m. and will air on CBS. 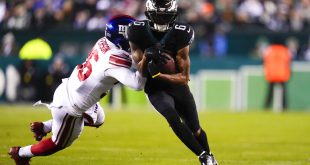