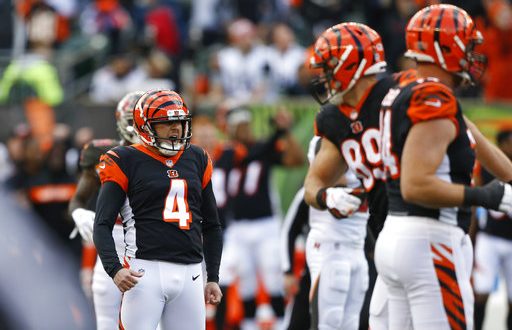 Cincinnati Bengals kicker Randy Bullock (4) celebrates a game0winning field goal against the Tampa Bay Buccaneers during the second half of an NFL football game in Cincinnati, Sunday, Oct. 28, 2018. The Bengals defeated the Buccaneers 37-34. (AP Photo/Gary Landers)

It was a rollercoaster day for the Tampa Bay Buccaneers. They fell way behind early in Sunday’s matchup with the Cincinnati Bengals. A change under center provided a spark for the team. They came close, but a 44-yard field goal from Bengals kicker Randy Bullock ended the rally and the game. The Buccaneers lost 37-34 Sunday to the Cincinnati Bengals for the team’s fourth loss in five games.

The Bengals suffered their second largest defeat under head coach Marvin Lewis last week. The defense was tasked with bouncing back. It looked as if history was going to repeat itself early. Tampa Bay quarterback Jameis Winston led his team to a prime scoring position, the Bengals 18-yard line. The Bucs got nothing on the drive thanks to safety Shawn Williams, who intercepted Winston’s pass in the end zone. This stop set the tone for the afternoon for the Bengal defense.

After both teams traded punts, the Bengals got on the board with a 1-yard touchdown run from running back Joe Mixon.

On the next Tampa Bay possession, Winston got the team within the Cincinnati 25-yard line, trying to tie the game. However, Winston would throw his second interception of the game. This time linebacker Preston Brown got his hands on the pass and took it to the Bengals 42-yard line.

The Bengals capitalized on another Winston mistake and scored on a 9-yard touchdown pass from quarterback Andy Dalton to receiver Tyler Boyd. This gave Cincinnati a 14-0 lead.

The lead would grow to 21-0 thanks to Mixon’s second touchdown run of the day, this time from nine yards out.

The Buccaneers would finally get on the board with a 60-yard touchdown pass from Winston to wide receiver Desean Jackson. The Bucs didn’t convert the PAT and still trailed 21-6.

The next Cincinnati drive saw Dalton hook up with wide receiver AJ Green for a 17-yard touchdown connection, extending the lead to 27-6 after a missed PAT.

The Bucs got a field goal before the end of the half to make it 27-6.

The Buccaneers took the opening kickoff down the field and scored a touchdown on a Peyton Barber touchdown run. Tampa Bay was back in the game, down 27-16.

On the next Buccaneers possession, the good fortune for the offense turned south. Winston was intercepted for the third time, this time by Bengals linebacker Jordan Evans.

The Buccaneers tried to get things going offensively. However, things turned from bad to worse. Winston’s fourth interception of the afternoon was taken to the house by safety Jessie Bates. The pick-six gave the Bengals a 34-16 lead.

Winston spoke after the game about his four turnovers.

Fans of the Buccaneers thought Fitzmagic ran out a few weeks ago. But there might be still some left over. Fitzpatrick led the offense down the field, leading to a 38-yard field goal from kicker Chandler Catanzaro. This cut the Cincinnati lead to 34-19.

After the Bengals went three and out, Fitzpatrick connected with wide receiver Mike Evans for a 72-yard touchdown pass on just the second play of the drive. This score made it a one-possession game, 34-26.

Another Bengals three and out gave the Bucs the ball back with the chance to tie the game. Fitzpatrick led the team on a 10 play, 88-yard drive in a little over two minutes. The drive was capitalized with an 18-yard touchdown pass from Fitzpatrick to tight end OJ Howard on fourth down. The Bucs converted on the two-point conversion, a Fitzpatrick pass to receiver Chris Godwin. Fitzmagic brought the Buccaneers back, tying the game at 34 apiece with just 1:05 left in the game.

However, the Fitzmagic wasn’t enough for the Buccaneers. Dalton led the Bengals into field goal range, setting up the 44-yard game winner for kicker Randy Bullock. Bullock knocked it through the uprights, giving the Bengals the win 37-34.

No matter who starts under center, the Buccaneers have a tough game coming up this week. They’ll travel to Charlotte to take on their division rival Carolina Panthers. Kickoff is set for 1:00 p.m. Sunday.