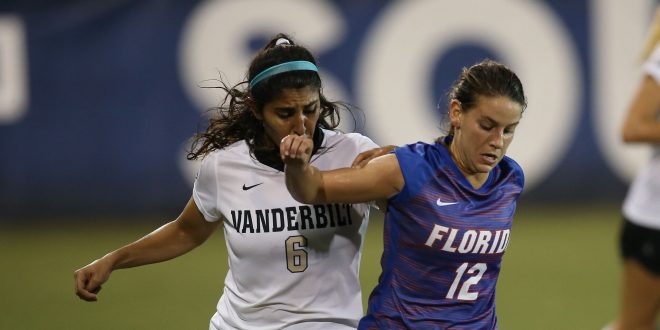 Survive and advance. That’s how the Gators soccer team made it to its 21st SEC Tournament semifinal. Florida usually cruises by as one of the top seeds in play. This season, the team went in as a No. 8 seed, beating No. 1 Vanderbilt to play another day.

This matchup was a defensive battle, with the Gators winning just 1-0. Madison Alexander, Florida’s leading scorer this season, scored off the crossbar to put the team up.

Now, Alexander has six goals. That would be the only scoring play of the night from either team. However, Florida goalkeeper Kaylan Marckese made this wild save to keep the Commodores from tying it up.

Marckese is the program leader in solo shutouts, with 29 to her name after tonight.

Florida moves to 7-9-4 overall, while the Commodores fall to 15-3-1 overall. Not too shabby for a struggling Gators season.

It is no surprise that Florida re-ignited its spark against Vandy tonight.

Tonight’s meeting was not the first between the two teams this season. The Gators hosted the ‘Dores to open conference play, falling 2-1.

Earlier in the season, the team was in the midst of a seven-game scoring drought, until Lais Araujo connected with the net against the team that would be the regular season champions. So, the Gators finally got their revenge for that 88th-minute goal that stopped them from opening their SEC schedule with a win.

Florida will take on the winner of Arkansas/Mississippi on Thursday. The Gators recently shut out Arkansas to lock up the eighth seed in the SEC Tournament. They have not met Ole Miss yet this season.