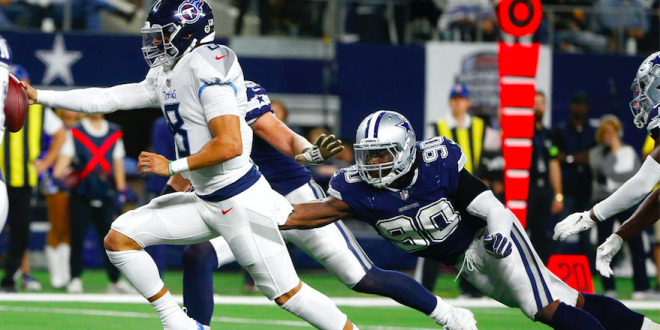 As we reach the halfway point in the NFL season, the recent Monday Night Football bout between the Titans and the Cowboys could prove to be rather significant.

Heading into the game on Monday night, the Dallas Cowboys were sitting at 3-4 on their season. The hope was that they could salvage their season at its halfway mark and move to .500. Unfortunately for Dallas, that was not the case and fans were not happy.

I woke up and no one was fired…unacceptable #DallasCowboys

The Cowboys coaches had 2 full weeks to prepare for the Titans. The TITANS!

Heading into this game, the Cowboys were performing best when they were at home in AT&T Stadium– a perfect 3-0. However, when the Titans rolled in that all changed as they handed Dallas their first loss at home and fifth loss of the season.

Dallas now sits in third place in the NFC East standings. The Redskins are leading the division at 5-3, while the Eagles are right behind them at 4-4. While their NFC East opponents aren’t performing much better than them, it is unclear if the Cowboys can or will bounce back from two back-to-back losses and a less than .500 performance on the season thus far.

The Titans were on a three-game losing streak before their big win on Monday night. The big win over Dallas could potentially be what sends them to the top of the AFC South rather than falling to the bottom.

As the game started, it looked rocky for the Titans, but they quickly bounced back and took control of the primetime game. Tennessee would go on to win by a score of 28-14 in front of over 90,000 fans.

Tennessee gives Dallas their first home loss of the season and first on Monday Night Football since 2014. pic.twitter.com/jNiXJeibG2

With the Jacksonville Jaguars near Super Bowl appearance last season, it was certainly expected that they would be leading the AFC South Division this season. However, the unlikely Houston Texans have jumped to 6-3 on the season with the Titans now trailing at 4-4. The Jags and the Colts both sit at 3-5 and its not certain if the two can even make a comeback with the way Tennessee and Houston have started to perform.

The @Titans are now ranked No.1 in the NFL in scoring defense, allowing just 17.6 ppg in eight games.

Where to go from here

It’s unclear if the Titans can capitalize on this momentum and take control of the AFC South. What we also don’t know yet is if this will be the loss that the Cowboys let completely be their downfall. But what is certain is that each of these teams have a lot of work to do if they hope to salvage the second half of the season and keep their playoff hopes alive.