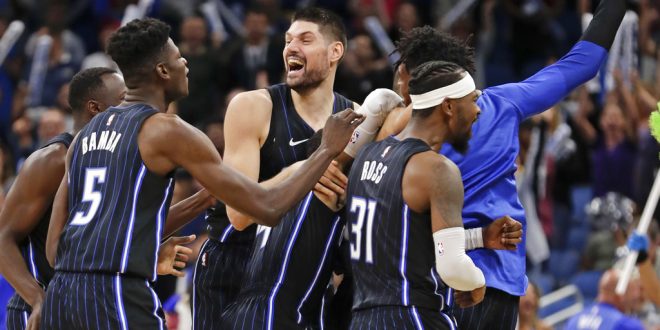 Orlando Magic players including Mohamed Bamba (5), Nikola Vucevic, center, and Terrence Ross (31) celebrate after Evan Fournier made a shot at the buzzer to defeat the Cleveland Cavaliers in an NBA basketball game, Monday, Nov. 5, 2018, in Orlando, Fla. (AP Photo/John Raoux)

The Orlando Magic Topples the Cleveland Cavaliers In Buzzer-Beater

Coming off of a road win against the Spurs, the Orlando Magic got the job done once again at home Monday night. A last ditch jumper from Evan Fournier helped the Magic edge off the Cavaliers with a final score of 102-100. But the win wasn’t in plain sight for the entire game.

A dominant first half, a tricky second half

The Magic outscored the Cavaliers in the first two quarters, but lost control in the third quarter. Fournier missed five shots from both in and outside of the perimeter, and was substituted out in favor of Jonathan Simmons with 2:02 left in the quarter.

Despite these numbers, it was the last 41.9 seconds that were the most critical.

A timeout called with 41.9 seconds didn’t fully establish the Magic’s momentum, but it helped. What followed was a Cavaliers timeout, plenty of substitutions from both teams and multiple fouls. But the timeout called with 1.8 seconds left proved crucial, as Evan Fournier’s pull-up jumper from Aaron Gordon gave the Magic the win.

A win over the Cavaliers gives the Magic their first winning streak of the season. Just as important is the progress continuously being made by Mohamed Bamba. While the rookie didn’t provide any significant scoring contribution, his other work in the paint kept the Magic in the game. The 6th-round pick out of Texas accumulated 6 rebounds, matching up to his current season average.

Other key role players in the win included Aaron Gordon, who put up a team-high 23 points for the night, and Nikola Vucevic, who provided 14 points and 10 rebounds.

The loss brings the Cavaliers to an NBA-worst of 1-9. The Cavaliers will travel to face the Oklahoma City Thunder on Wednesday night. The Magic will visit the Detroit Pistons in the same evening.