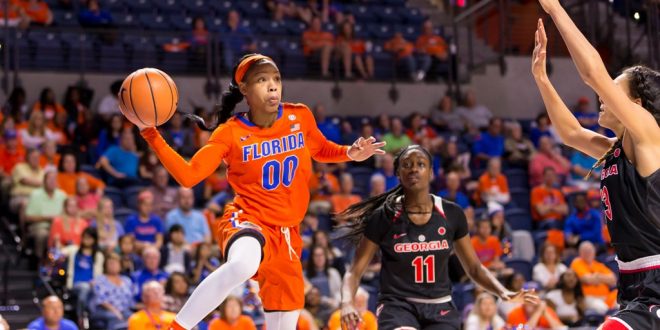 Preview: Florida Women’s Hoops On The Road to Face FSU After Season-Opening Loss

Sunday will mark the Florida women’s basketball team’s first test on the road this season. The team will travel to Tallahassee to face archrival Florida State after a tough 60-58 loss in their season-opener against Gardner Webb. This was Florida’s first loss in a season-opener since their 2015-2016 season.

“I know we have a group that’s going to take this loss, learn from it, and come back ready to go and get better. It’s frustrating and nobody likes to lose, but it’s part of the game and we’ll take it and learn from it,” Gator coach Cam Newbauer says.

Although Florida holds an all-time 42-32 edge over Florida State, the Gators have lost the last two meetings against the Seminoles. Florida State is 2-0 this season after defeating Troy and North Florida earlier this week.

Both returning starters Funda Nakkasoglu and Delicia Washington were clear leaders on the court during Tuesday’s matchup putting in 22 and 14 points for the Gators, respectively. Redshirt junior Zada Williams collected her first career double-double with 12 points and 10 rebounds in her first game as a Gator. Florida showed potential in various parts throughout the game as the Gators out-rebounded its opponent, 44-34. Florida shot 25-60 (41.7 percent) from the field and in contrast, Gardner Webb shot 21-60 (35 percent).

This team has a new shape with only two returning starters from last season (Nakkasoglu and Washington). Newbauer says they are both adjusting to their new roles as leaders.

“Delicia and Funda are in a completely different realm of what’s being asked of them in terms of leadership. They’re doing a terrific job of trying to do the best they can at that role,” says Newbauer.

Standing tall throughout the process. pic.twitter.com/BPeREL1hpV

With so many new faces on the roster, there are a lot of adjustments the team needs to make as they continue the season. Newbauer says communication is the biggest factor the team needs to improve on as they prepare for FSU.

“It’s once again part of the process for young people– forcing them to communicate. Sometimes it takes a loss to understand the value of true communication,” Newbauer says.

Washington also says it’s both her and Nukkasoglu’s responsibility to teach the newcomers the level at which Newbauer expects them to play.

“We have to stick together as a team and fight it out. We have to show them what it takes to play in the SEC and play at that level,” Washington says.

Florida also suffered throughout the game with turnovers and missed three-pointers. The team was 4 for 24 in three-point attempts. In the final seconds, the Gators were down by two points and Nakkasoglu had possession when she attempted a deep three-pointer. But her missed shot with three seconds left finished the game.

“You always got to be confident in yourself when your number is called to take a shot like that… some days they go in and some days they miss– today it just didn’t fall,” Nakkasoglu added.

Florida State destroyed the Troy Trojans in their season opener on Tuesday, 103-67. Nicki Ekhomu set the tone for the Seminoles locking in 31 points. However, the Gators and the Seminoles are relatively similar from a statistical standpoint. In Tuesday’s game against the Trojans, Florida State shot 41 percent, the same as Florida’s percentage. FSU also struggled at the three-point line, only shooting seven percent better than Florida (23 percent).

The Seminoles offensive efficiency improved during Friday’s matchup against North Florida. FSU shot 48 percent overall and 33 percent from beyond the arc. Kiah Gillespie stole the show, scoring 17 points with 13 rebounds for the Seminoles. Ekomu also led the team in assists (6).

The Gators will be in Tallahassee on Sunday afternoon to face Florida State in the Fresh from Florida Showdown. Tip-off is set for 3 p.m.