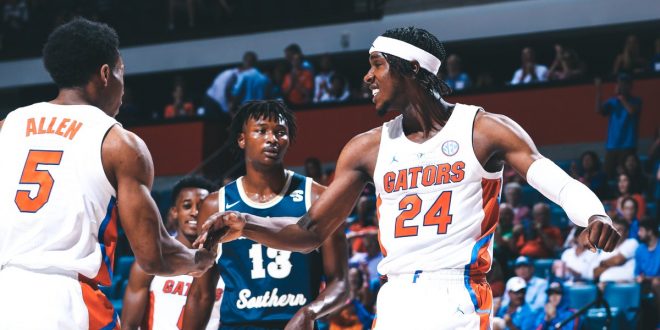 Florida Hoops Bounces Back in Home Opener Against Charleston Southern

The Gators found their footing late in the first half and early in the second half after struggling out of the gate. They outscored Charleston Southern 60-36 in the final 30 minutes of action.

After failing to score a point in the season opener against Florida State, KeVaughn Allen came out aggressive against the Buccaneers. In the first four minutes of action, he produced six points, two steals, and a smooth behind-the-back assist to Deaundrae Ballard.

Allen finished the night with 14 points, five steals (career high), two assists and two rebounds. He looked extremely energized on both sides of the ball on Friday night.

Gator coach Mike White discussed how important Allen was for the Gators against Charleston Southern.

The Gators really struggled on defense in their season-opening loss to Florida State. This was not the case on Friday night against Charleston Southern. Florida limited the Buccaneers to 14 for 55 (25.5%) shooting from the field and 5 for 28 (17.9%) from beyond the arc.

They also created 12 steals and forced 19 turnovers. Florida really clamped down defensively to start the second half. They held the Buccaneers scoreless for the first eight minutes which led to a 12-0 Gators run.

Is Ballard’s Emergence for Real?

Last season, Ballard put up double-digit scoring in three of the first four games. He proceeded to struggle and his minutes dwindled to the point where he would only get in during blowouts. Ballard is off to the same type of hot start, posting double digits in the first two games of the season and his defense has also been much improved.

He put up 12 points on 5 of 9 shooting and had six rebounds in 18 minutes of action. It seems like Ballard is going to be a key cog in Mike White’s rotation moving forward.

Ballard discussed his daily approach and how he plans to continue this hot start.

Andrew Nembhard has shown why he entered college basketball as one of the premier recruits in the country; his playmaking ability is elite and he doesn’t have any noticeable weaknesses. He played extremely well against Charleston Southern, posting seven points, seven rebounds, six assists and two steals in a team-high 30 minutes.

White’s Rotation is Rounding Into Form

During the preseason, Mike White discussed how his rotation could go 12 or 13 men deep. No one knew what to expect coming into the season regarding playing time. The only guaranteed minutes were for the returning key contributors in Jalen Hudson, KeVaughn Allen, Keith Stone and Kevarrius Hayes.

Outside of those four, it seems like Andrew Nembhard, Deaundrae Ballard, Mike Okauru, Keyontae Johnson and Noah Locke will round out the rotation. Gorjok Gak will likely return to the rotation when he is fully healthy. It’s unclear if Dontay Bassett is not completely healthy or has just lost his spot in the rotation.

The Gators will look to keep this momentum going as they host La Salle on Wednesday, November 14th at 7 p.m.

Previous Ohio State vs Michigan State, Georgia vs Auburn, and Other Week 11 Matchups
Next Preview: Florida Women’s Hoops On The Road to Face FSU After Season-Opening Loss