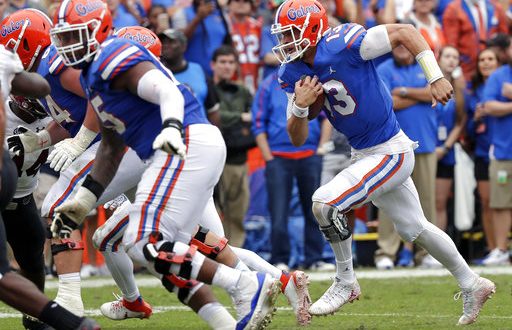 In his first season as the Gators’ offensive line coach, John Hevesy has his unit playing very well. From watching the Gators last season to this season, the improvements of the offensive line are in plain view. In both run-blocking and pass protection, the line is performing at high efficiency. Florida allowed 3.36 sacks per game last season. This year, that number is all the way down to 1.3. They are tied for 22nd in the nation in that statistic and third among SEC teams. However, for Hevesy, he’s focused on getting his group to play even better than they already are. He says he thinks his players can improve “fundamentally.”

The #Gators rank 1st in the country in allowing the fewest amount of sacks in “passing downs” at just 1.1%, according to SBNation’s @SBN_BillC. Last year, they ranked 98th at 9.8%. Big improvement for John Hevesy.

Key to the Running Game

Last season, the Gators averaged 156.4 rushing yards per game. This year, they are averaging 203.1 rushing yards per game behind their linemen. This is a huge part of the team’s offense and their success. In Florida’s home win against South Carolina, the team rushed for 367 yards. Hevesy explained how his unit contributed to the fierce rushing attack.

Hevesy also talked about the importance of blocking angles and technique, which contributed some huge runs including Jordan Scarlett’s late rush that helped ice the game.

Hevesy says he has one goal: winning. “I just want to win. The bottom line is winning.” To get those wins, Hevesy said he doesn’t care if his line has to run-block or protect the pass.

Chemistry is also a big part of an offensive line’s success and the Florida offensive line coach knows that if one player doesn’t make the right play, then the whole offensive line didn’t do their job as a unit.