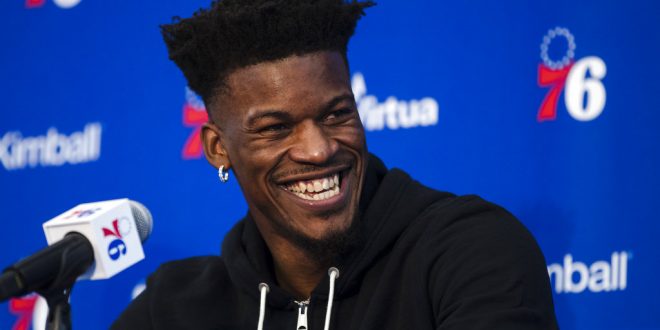 Trade talks have turned into reality as All-Star Jimmy Butler has been officially traded to the Philadelphia 76ers. The former Chicago Bulls and Minnesota Timberwolves shooting guard joined the team today after a long saga that began before the season.

Butler, who is averaging 21.3 points per game in 10 starts, was part of a deal that included center Justin Patton for Robert Covington, Dario Saric, Jerryd Bayless and a second-round pick. He joins the current 9-6 Sixers, which sit 3 1/2 games back for first in the Eastern Conference.

With Butler now part of the “Process,” there’s a new Big Three in the NBA. He joins rookie of the year Ben Simmons and All-Star Joel Embiid to form a trio of offensive talent. The Sixers are looking to improve their offensive efficiency (21st in the league) and all around shooting percentage.

Butler talked about when they get out there and play together and how it’ll hopefully be a good story.

In addition to those two, he joins a roster with veterans Amir Johnson and JJ Redick and point guard Markelle Fultz. Simmons spoke about the roster’s newest addition and what he likes about him.

He also said he’s excited for Butler and his winning mindset to join the team.

Looking For A Championship

Though his role and overall impact on his new team are not yet known, Butler has a desire to win and to do it with the Sixers. His addition to the team gives Philly a better chance to compete in the East, particularly if there’s chemistry throughout the lineup.

The team’s first opportunity to get the Big Three together will be Wednesday against the Orlando Magic.

He talked about winning a championship and what it would mean to him.

Thibodeau’s Thoughts On The Trade

Timberwolves head coach Tom Thibodeau, who also coached Butler while he was in Chicago, talked about the trade and the players they got in return.

The 76ers and Timberwolves will face each other in the first of two matchups on Jan. 15 on NBA TV.