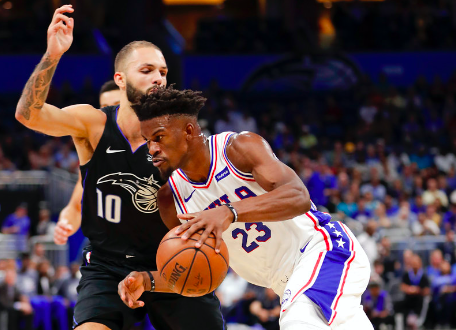 Jimmy Butler’s debut for the Philadelphia 76ers was supposed to go well. It was supposed to end in a win. For much of the time, it looked like it would be. Then the 4th quarter rolled around. Then the Orlando Magic played spoiler, and they spoiled the night in spectacular fashion.

The main story-line going into the game was the debut of Jimmy Butler in a 76ers uniform. Butler was just recently traded from the Minnesota Timberwolves, where he averaged 21.3 points per game. He picked up right where he left off.

.@JimmyButler with his first points as a 76er! #HereTheyCome pic.twitter.com/3TEO75Sl5Z

Butler played for 33 minutes and shot 50% from the field. While it wasn’t as spectacular as a typical Jimmy Butler game, it was still a good showing. Other 76ers looked equally impressive, as JJ Redick had 22 points and Wilson Chandler scored 14. Joel Embiid also contributed a crisp 19 points, including 4 three-pointers.

Philadelphia is still gelling as a team, especially with Butler now inserted into the lineup. They played well for the most part, leading the Magic by as much 10 in the 2nd quarter and 16 in the 4th quarter. The offense stalled at times however, and it ended up being the difference in the game.

The stalling 76ers offense allowed the Magic to force themselves back into the contest several times. Despite double-digit deficits in both the 2nd and 4th quarter, the Magic led at the half and regulation. How they got there was an impressive effort.

With a combination of forcing turnovers, hitting free throws and sinking three-pointers, the Magic erased a 16-point deficit in around 3 minutes. They took the lead on a Terrence Ross three-pointer assisted by Jonathan Isaac.

Terrence Ross was far from done for the night. The game was back-and-forth until the end, with both teams running up and down the floor. Wilson Chandler in particular willed the 76ers offense to keep it close. Several lead changes resulted of it. Then, in the final minute, Aaron Gordon fouled Ben Simmons. Simmons hit both free throws at the line to tie the game at 106. The Magic were called for traveling on their next possession, but a timely JJ Redick turnover got them the ball back with little time left. Terrence Ross took the ball to the arc, danced just enough, and shot it. With 8.7 seconds left on the clock, it went in.

The Magic play the Los Angeles Lakers at home next on Saturday, November 17th at 7:00 P.M.