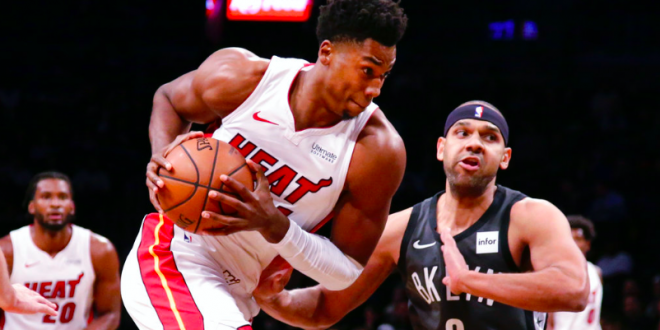 The Miami Heat is now 6-8 on the season after topping the Brooklyn Nets 120-107 in the Barclays Center. While this start is maybe not what Miami hoped for, the team did snap its three-game losing streak. Goran Dragic and Tyler Johnson combined for 45 points and Hassan Whiteside posted a double-double.

Miami jumped out to a hot start, leading the Nets 37-21 in the first quarter. The team’s 37 points are its highest 1st quarter showing of the season. The Heat locked in, strongly attacked the rim, and created a couple good looks. Case in point, former Kentucky star Bam Adebayo found the hoop for this slam dunk. He finished the night with 12 points off 6-of-6 shooting.

Miami also held Brooklyn to 25% shooting in the first quarter. At halftime, the Heat was up 61-49. Something the team is struggling with thus far is getting past other teams defenses. However, Hassan Whiteside (14 pts., 10 ast.) dazzled up against this double-team in the third quarter.

Tyler Johnson (24 pts.) led the way during the fourth quarter with 10 points off 4-of-5 shooting. The Heat dropped 30 in the last 12 minutes and left Brooklyn with the win.

Finding A Way to Win

While the Heat is far from depleted with Dragic, Johnson, Whiteside, Rodney Magruder, and Josh Richardson on the floor, the team was still without some big names. (That five-man group put up 84 of the team’s 120 points).

Neither Dion Waiters (surgery) nor new dad Dwyane Wade was able to take the court last night. However, after losing three consecutive games, Miami was able to storm back and get it done on the road.

The Heat is currently 9th in the East (just one slot behind in-state rival Orlando).

Tomorrow, the Heat will remain on the road to take on the Indiana Pacers. The Victor Oladpio-led Pacers are currently 8-6. Oladipo is averaging 23.8 points and 7.1 rebounds on the season.