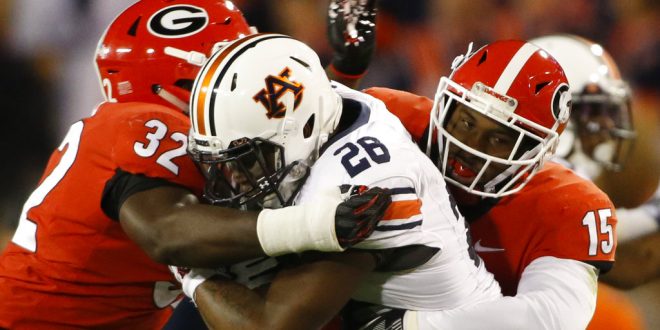 The Georgia defense stops Auburn running back JaTarvious Whitlow (28) during the first half of an NCAA college football game in Athens Ga., Saturday, Nov. 10, 2018. (Joshua L. Jones/Athens Banner-Herald via AP)

The Auburn Tigers will take on the Liberty Flames in their last home game of the season this Saturday. Kick off is set for 4 p.m. ET at Jordan-Hare Stadium. Coverage of the game will be on SEC Network.

This is the first ever meeting between these two teams. Both teams are heading into this matchup coming off of disappointing losses.

The Tigers are currently 6-4 on their season and 3-4 in the SEC. The Tigers are looking to bounce back as they are coming off a 27-10 loss against the Georgia Bulldogs.

Auburn running back JaTarvious Whitlow is the player to watch in this weekend’s matchup. Whitlow has rushed for 668 yards and four touchdowns this season.

Auburn’s defense has only allowed a touchdown on just 29 percent of its opponents’ trips into the red zone, which is currently the best in the nation. The Tigers have an all-time record of 84-28-6 in their final game played in Auburn each season.

In the SEC’s weekly media teleconference, Auburn head coach Gus Malzahn put a lot of emphasis on the seniors for their Senior Day this Saturday. Auburn will honor 16 seniors in its pregame ceremony

Malzahn says this is a big game, simply because of Senior Day. He’s hoping to send the seniors off with a victory for their last home game.

Malzahn describes the seniors as a “high-character bunch,” who will be very successful after football. He said he is really proud to have coached them.

This matchup against Auburn will be Liberty’s final road game of the season. This will be the Flames first game versus an SEC team in program history. The Flames are looking to break their two-game losing streak, win their first ever SEC matchup and win their first game within the state of Alabama.

The Flames are coming off a 45-24 loss against the Virginia Cavaliers and are currently 4-5 on their season.

Comparing these statistics to Auburn’s, Liberty’s offense will have to be on their game to push through the Tigers aggressive defense. Auburn’s defense needs to be on the lookout for Liberty WR Antonio Gandy-Golden, who has had four 100-yard games this season. Gandy-Golden only needs 118 more receiving yards to have back-to-back 1,000-yard season.

Sydney is a senior studying telecommunications with a specialization in sports media at the University of Florida. She is a multimedia sports reporter for ESPN 98.1 FM/850 AM WRUF and WUFT-TV.
Previous Mississippi State hosts Arkansas in SEC matchup
Next Fisher, Texas A&M have their hands full against No. 25 UAB