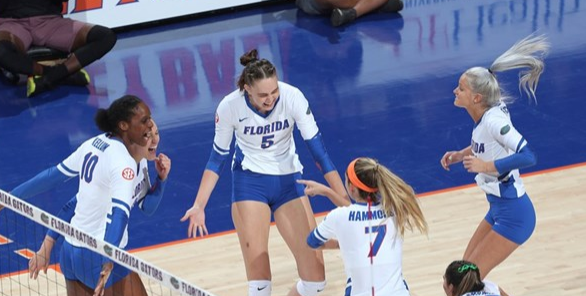 Florida is in the home stretch of the regular season.

LSU will be the first of four matches over the next week for Florida. A win would give them 28 consecutive seasons with at least 22 wins.

Head Coach Mary Wise on this stretch of matches:

Preparing for a Familiar Face

Wise said the team has a certain format when they prepare for rematches with other squads. For them, it’s a combination of past and present.

Wise on preparing for teams the second time around:

“I love watching film,” she said. “I think that’s my favorite thing in the entire world. For me, it’s so much fun because we watch a lot of the film of ‘What did we do last time that made us win?'”

Not only do they look at what they did well, but Kramer also said the team looks at where they lost points too.

Sometimes they’ll even switch the game plan around if something didn’t work out perfectly.

LSU enters the match winners of four straight. They are averaging just under a .300 hitting efficiency and allowing on average just .193 in that stretch.

Their kills leader Taylor Bannister is averaging .267 hitting and has recorded double-digit kills in each of these past four matches.

Thayer Hall, who will be out again due to injury, led the way with 11 kills that night.

The Gators are four matches away from the NCAA Tournament.

Sophomore DS Chanelle Hargreaves said it’s about taking a little from every match and adding it in to get ready for tourney time.

“It’s our motivation time,” Kramer said. “This is our time… we have to iron out the wrinkles and become the Florida Gator team we know we can be.”

She said the team needs to find a way to where everyone has a good match. She couldn’t recall a time where that has taken place this season.

Wise on the importance of playing good volleyball now:

The Gators can be seen in Exactech Arena tonight at 7 p.m. or on SEC Network Plus and heard on the airwaves of ESPN 98.1 FM/850 AM WRUF.