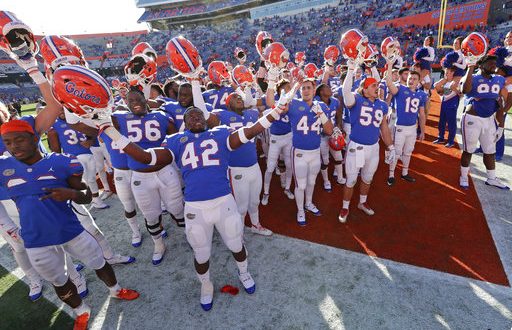 On a special day for the Gator football team’s graduating seniors, Florida (8-3) made sure to treat The Swamp to quite a special scoreline as well.

Coach Dan Mullen’s team finished their home campaign with an offensive explosion. The Gators pummeled Idaho (4-7), 63-10, and right from the onset, things went downhill fast for the Vandals and quarterback Mason Petrino.

The junior quarterback’s first involvement of Saturday’s game was an interception that was returned for a touchdown — his first of two interceptions thrown on the day — by Chauncey Gardner-Johnson.

Essentially, that opened the flood gates for what turned out to be a dismal day for Idaho and the father-son duo of Mason, and head coach, Paul Petrino.

After the game, Mullen said he was happy to see his team break the trend of starting games poorly.

Idaho’s offense was by no means a tough opponent for the Gators on Saturday, but frankly, it had been a while since Todd Grantham’s defense had put together a remotely solid performance. October 6 against LSU was the last time the Gators gave up less than 20 points in a contest.

Today the Gators didn’t allow a point until there was barely over a minute left in the third quarter. Grantham’s defense forced Petrino to scramble out of the pocket all game long, barely giving him any time to throw. When he was upright, the QB was regularly inaccurate and underthrew a number of balls.

Petrino was replaced by freshman Nikhil Nayar after halftime, only to be reinserted after two drives. The junior finished 12-for-31 for just 70 pass yards and a touchdown. He did scramble for 87 yards on 12 carries, but that was due to the constant onslaught of pressure he received from the Gators D-line.

Gardner-Johnson’s interception set the tone from the start, and neither the Gators’ defense nor offense slipped up on Saturday.

An early lead clearly put the Gators’ offense in a groove. QB Feleipe Franks then wasted no time getting the party started in Gainesville.

Idaho followed up their first costly possession with four straight three-and-outs in the first quarter. In the meantime, Franks threw for two scores and rushed for another.

The first score came via the ground and capped an incredibly quick scoring drive (3 plays, 47 yards). Franks’ second TD was a dart to tight end Kyle Pitts who found himself in acres of space after a blown coverage for a 52-yard touchdown.

Franks finished with four total touchdowns, three through the air, and his day was over before halftime. The three scores bring his season total up to 20 passing touchdowns, more than double than he had all of last season (9).

Just before halftime, the keys to the offense were handed to freshman QB Emory Jones. The highly touted youngster also showed why the Gator Nation is so excited to see him on display. Jones finished 12-for-16 on Saturday with two touchdowns and an avoidable lost fumble.

The two Gator QBs combined for 399 passing yards on the day. The number marks the most passing yards accumulated by the QB position since Tim Tebow threw for 482 yards in the 2010 Sugar Bowl.

Mullen explained after the game just how Jones impressed him on Saturday.

Dan Mullen must now prepare his team for their final regular season game — a testy proposition against Florida State (5-6) next weekend. The Gators have fallen to their cross-state rivals in each of their last five meetings.

But this win gives Mullen and his coaching staff a few exclamation points at the end of a successful first season at The Swamp.

Mullen said that he knows his future teams will need to be better than 5-2 at Ben Hill Griffin Stadium, but he’s understandably proud of what this group of players have achieved in his debut campaign.

For graduating seniors like tight end C’yontai Lewis, this blowout win means much more than just a W in the victory column.

All that and more from a winning Senior Day in The Swamp! #GoGators pic.twitter.com/7e5cmuUjj5

Sports media and management student at the University of Florida. Content creator for ESPN 98.1 FM/ 850 AM WRUF.
@TheEdgarChavero
Previous Jaguars look to snap losing strak against the Steelers
Next Younger Talent Shines in Florida’s 63-10 Football Win Over Idaho