The point total for the Magic marks a season-high, surpassing their season high of 130 against the Lakers in the previous game.

The scoring outbreak also marks the first time in franchise history that Orlando has scored 130 points or more in consecutive games.

Magic forward Aaron Gordon rose for a big dunk a mere 20 seconds into the game. This slam was a sign of good things to come for Gordon and the Orlando offense.

Orlando put up 44 points in the first quarter, with Gordon scoring 12 of their first 14 points. The Magic made their first ten shots, while the Knicks struggled to keep up in the opening period.

However, in the second quarter, New York came storming back.

Trey Burke and Enes Kanter led the Knicks back into contention, with Burke scoring 16 of his 31 points in the first half and Kanter scoring 14 points and pulling down 16 rebounds.

At the end of the first half, the Knicks had cut the deficit to just one point, with the score 67-66.

Despite losing the big lead, the Magic came out of the locker room on fire to start the second half.

Nikola Vucevic carried the Magic down low, while Gordon continued to dominate with the ball in his hands.

In the fourth quarter, Jonathan Isaac was a spark plug, getting a block on defense and throwing down a huge dunk off a no-look pass from D.J. Augustine.

Orlando held onto their lead throughout the 2nd half, overwhelming the Knicks on their way to victory.

Stats To Look At

Aaron Gordon was a star in the Magic’s dominant win.

He finished the game with 31 points, shooting 13-17 and hitting four three-pointers.

As a team, the Magic moved the ball better than New York. Orlando had 35 assists, a huge number compared to the Knick’s 12 assists.

For the Knicks, Tim Hardaway Jr. was their leading scorer on the day, putting up 32 points on 9 of 20 shooting.

The Magic, now with a 9-8 record, have a day off before taking on the Toronto Raptors on Tuesday.

The Knicks will look to snap a five-game losing streak at home against the Portland Trail Blazers on Tuesday. 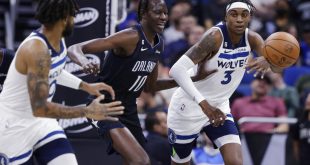