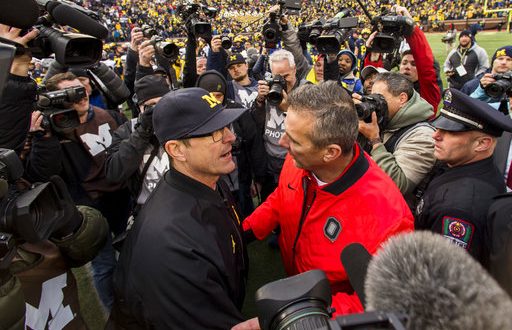 The Michigan Wolverines have a lot more at stake than winning a rivalry game in their meeting against Ohio State on Saturday. Michigan is looking to not only win the Big Ten East division title but also secure a spot in the College Football Playoffs.

The Buckeyes look to win their second straight Big Ten East title and defeat the Wolverines for the seventh straight time.

Next up, it's rivalry week and we're headed to THE GAME. pic.twitter.com/MZJGvhVAhn

Our defense was back at it yesterday 👀#GoBlue pic.twitter.com/QZeY3m17r1

Michigan is currently ranked No. 4 in the College Football Playoff rankings and a win over Ohio State could guarantee a playoff appearance.

Head coach Jim Harbaugh stated that his team is in playoff mode and noted the importance of a victory over a Big Ten opponent like Ohio State.

The Buckeyes have been consistent this season, edging out ranked Big Ten opponents such as Penn State and Michigan State. However, Ohio State revealed their weaknesses in their 52-51 overtime win against Maryland.

The Buckeyes’ defense struggled against a Maryland team that constantly ran the ball for long yardage. The Terrapins offense recorded 339 rushing yards and exposed the flaws of the Ohio State defense.

Ohio State head coach Urban Meyer stated that in order for the Buckeyes to be successful over Michigan the defense will need to play better.

The hopes for Ohio State lay in their offense and quarterback Dwayne Haskins’ ability to move the ball. In their win against Maryland, Haskins threw for over 400 yards and three touchdowns.

Dwayne Haskins is the first player with 400+ passing yards and 3+ rushing TD in a game since Patrick Mahomes in 2016 vs Kansas State.

Haskins now has 4 of the 5 400-yard passing games in Ohio State history. pic.twitter.com/jEjeKP7CwA