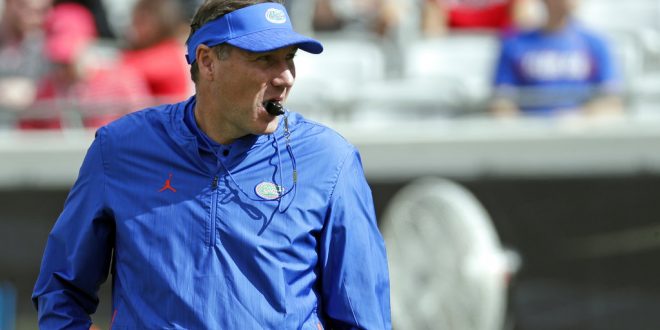 Florida football head coach Dan Mullen spoke to the media on Monday about the annual rivalry game against Florida State on Saturday.

This will be Mullen’s first game against Florida State since becoming the head coach of UF in November of 2017. In the press conference, the coach spoke about some key players for his team, as well as things to look out for with the Seminoles.

Florida State enters the big matchup against the Gators with a 5-6 record. The Seminoles need this last win to be bowl eligible. Mullen and his Florida team have a chance to end FSU’s 36-year bowl appearance streak. Mullen said that he would “love” to end Florida State’s season with a win on Saturday.

Mullen and then-head coach Urban Meyer were undefeated against Florida State in his four years as the offensive coordinator. Florida opened as a 3.5 point favorite to win the game and is currently a five-point favorite.

Mullen talked about players who were significant factors in the win over Idaho on Saturday.

One name that came up was offensive lineman Tyler Jordan. The senior filled in for suspended center Nick Buchanan and played exceptionally. Mullen named him his player of the week and said he has played well this season when asked.

The first-year head coach also mentioned running back Dameon Pierce, who has had rotational time in the offense but has gotten the head coach’s attention with his special team’s play. Mullen said that he has earned his time on the field with his effort.

The UF coach also talked about what he will look out for when preparing for the Seminoles.

Mullen praised fellow first-year coach Willie Taggart at Florida State and the system he has run in 2018, citing that the system is good with developing young players. Mullen also mentioned that, while the team has not lived up to its potential this year, Florida State still has the ability to make plays at will offensively.

He also talked about the unselfishness of the FSU wide receivers and how good of blockers they are. It will be something to watch on Saturday in Tallahassee.

@dyrudolph
Previous From the SEC to the Big 12: KU Hires Les Miles
Next Michigan vs. Ohio State: “The Game” Preview

Jeremiah Moon had struggled with injuries throughout his career with the Gators. Moon has suffered …