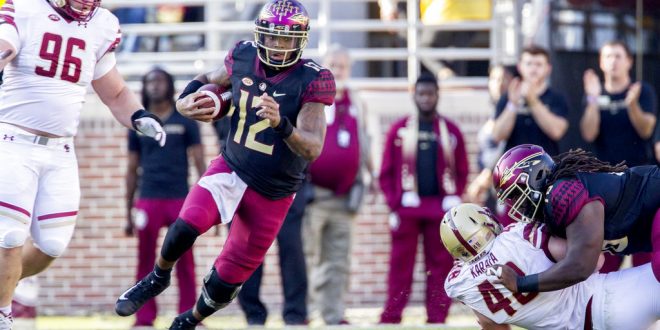 It’s rivalry week and the No. 11 Florida Gators will clash with the Florida State Seminoles in Tallahassee. Florida is rolling into this weekend with an 8-3 record and sights on a bowl game after a convincing 63-10 win against Idaho.

Florida State still has something on the line as the team seeks to earn bowl eligibility and keep a lengthy bowl streak alive. The Seminoles’ victory over ranked Boston College last Saturday gave them added incentive to beat their rival this year.

They’ve done it for the past five years and will look to make it six wins in a row over the Gators on Saturday.

Looking Back On The Seminoles’ Schedule

It hasn’t been smooth sailing for Florida State to this point in the season. But with five wins and potential bowl eligibility on the line, there’s still much to play for. The Seminoles put up several wins and losses early in the year and more recently dropped three in a row before the win over Boston College.

Part of the problem is the team has allowed an average of 405.5 yards per game and 5.10 yards per play and ranked 129th in penalties per game at 9.3. The defense has performed well at times and struggled at others.

Several notable losses include a season-opening defeat to Virginia Tech, 24-3, a mid-season 59-10 loss to Clemson at home, and a 42-13 loss to Notre Dame on the road. In each of those games, Florida State allowed over 300 yards of offense, including about 500 yards in the losses to Clemson and Notre Dame.

On the flip side, their opponent has compiled several notable wins, some thanks to stout defensive performances. Overall, the Gators allow an average of 343.3 yards per game and are tied for 22nd in turnover margin at plus-7.

Eyes On The Prize

Aside from the rivalry and bragging rights at hand, the 36 consecutive bowl streak is at play for the Seminoles, of course. The next longest streak is Virginia Tech’s at 25 straight bowl games. To keep that streak alive, Florida State broadcaster Keith Jones shared his thoughts on how the team can do it.

He also talked about the players’ motivation for this weekend’s game and how it means everything.

Jones touched on some of the key difference makers for Florida State, including wide receiver Tamorrian Terry on offense. And on the other side of the ball, players like defensive tackles Demarcus Christmas and Fredrick Jones have made an impact this season.

It won’t be long before the Seminoles and Gators clash in their 63rd meeting. Kick off is set for noon ET on ABC.

@wclewis_uf
Previous Wizards falling apart, Beal might be on his way out
Next Florida Women’s Basketball Face Undefeated Indiana Hoosiers