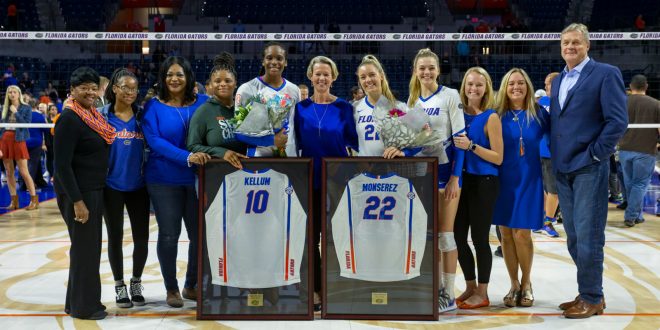 Florida sent its two seniors out in style Friday night.

The Gators now have reached the 24-win mark every single year under Head Coach Mary Wise. Wise said the match showed a lot good building blocks for the team heading into the postseason.

Three different Gators hit at least .400 on Friday night. Senior Taelor Kellum and redshirt sophomore Holly Carlton led the way with .467 hitting efficiencies. They both recorded eight kills on 15 attempts with only one error.

Rachael Kramer rounded out the trio with an even .400. She also recorded eight kills on 15 swings but had just one more error than the two.

Paige Hammons paced the team with 13 kills on 34 total swings. She registered a .265 hitting efficiency and her first double-digit kill game since Nov. 11 against Auburn.

It was the final regular season match of Taelor Kellum’s and Allie Monserez’s careers. Two of Florida’s most productive players.

Monserez came to the Gators by way of transfer from South Carolina.

She is the middle child a Monserez dynasty at UF. Her older sister Maddie was a defensive specialist under Mary Wise from 2011 to 2014. The younger sister, Marlie, backs her up at setter for the Gators this season.

Monserez’s 2,856 total career assists are currently good enough to land her at No. 7 on the all-time Gators list. In 2016, her first season as the primary setter, she led the nation in assists per set at 12.36. She finished Friday’s match with 26 assists and two service aces.

“It was such an amazing experience playing in the O’Dome for these past three seasons,” she said. “It was awesome to go out like this.”

Kellum hasn’t had as many chances as her fellow senior. She patiently waited her turn behind a four-time All American in Rhamat Alhassan.

And Kellum has taken advantage of her opportunity this season after only playing in just 28 matches her first three seasons on campus. She sits second on the team among qualified players in hitting efficiency along with second on the team in blocks.

The Chattanooga native said she could not have asked for a better senior night.

“It helps to have so many others behind me, along with Allie,” Kellum said. “It made it such a special senior night. I tried not to think about it as my last home game, but I knew it wasn’t my last match with the team.”

On to the Tourney

The Gators will find out their seeding on Sunday as the Selection Show takes place on ESPNU. They will wait and see if they will end up hosting for the first and second rounds of the NCAA Tournament.