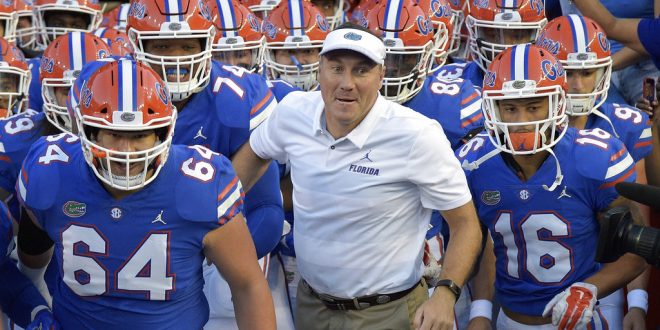 The number 11 Florida football team (9-3) broke a Florida State 36-year bowl streak after beating the Seminoles (5-7) 41-14 in Tallahassee on Saturday.

Coming into Saturday’s game, Florida State had won the previous five match ups. While no current Gators had won against the Seminoles, head coach Dan Mullen was 4-0 against FSU in his previous stint with the Gators as an offensive coordinator.

Saturday’s game got off to a slow start, with both teams going three-and-out on their first drives. A 27-yard field goal from Florida’s Evan McPherson on the final play of the first quarter put the Gators up 3-0.

Florida’s offense started to come to life in the second quarter. A 74-yard touchdown run from Lamical Perine and a 23-yard field goal gave the Gators a 13-point lead.

However, Florida State found the end zone just before the half. A spectacular 15-yard catch from running back Cam Akers got Florida State on the board.

What a grab by Cam Akers pic.twitter.com/qyVRYahGcy

Florida and quarterback Feleipe Franks got into a rhythm quickly after the half. A three-yard touchdown pass from Franks to Josh Hammond capped a 12-play drive. A fumble recovery shortly after resulted in another trip to the end zone for the Gators. FSU would score their final points of the day on their next drive, where quarterback Deondre Francois escaped for 32 yards on fourth-and-14. Francois would run it himself for a touchdown on the next play.

The Gators broke it open in the fourth quarter, bringing their 13-point lead to an eventual 27-point victory at Doak Campbell Stadium.

Born and raised at the ballpark! Typically quiet- until it comes to sports. I'm a South Florida native with a passion for baseball nearly as strong as my faith. Grew up in garnet + gold, turned out sporting orange + blue. Likely to be found with a camera. And yes, I take food pictures.
@victoriarossman
Previous CeCe Jefferson’s Last Romp in the Swamp
Next Jacksonville Jaguars: Trying to come back from a lost season