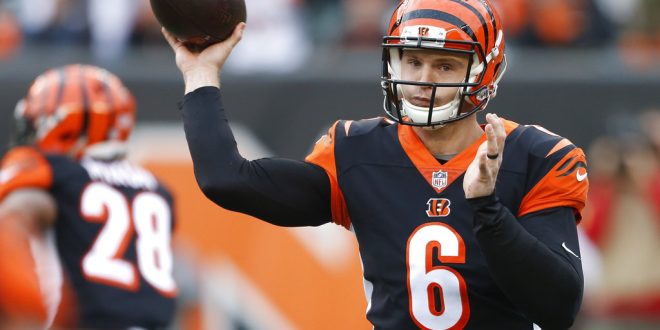 Cincinnati Bengals quarterback Jeff Driskel looks to throw a pass in the second half of an NFL football game against the Cleveland Browns, Sunday, Nov. 25, 2018, in Cincinnati. (AP Photo/Gary Landers)

Former Gator Jeff Driskel to start for the Bengals

Cincinnati Bengals veteran quarterback Andy Dalton’s season ended in last week’s game against the Cleveland Browns. The quarterback who’s been starting since he was drafted in 2011 suffered a thumb injury in last week’s game. On Monday the team announced Dalton was being sent to the injured reserve list. With Dalton on the IR, former Gator Jeff Driskel had his number called as the starter.

Jeff Driskel was selected in the 2016 draft by the San Francisco 49ers. However played in a game for the 49ers. The Bengals claimed Driskel off of waivers back in 2016. However Driskel just made his NFL debut this year in 2018. He played in October when he came in to relieve Dalton in the final minutes of a 45-10 loss to the Kansas City Chiefs.

After Dalton’s injury on Sunday, the Bengals were forced to bring in Driskel. Driskel who was second strong went 17-29 with 155 passing yards and one touchdown. A 21-point lead at halftime by the Browns were too much for the Bengals, now led by Driskel, to overcome, but he performed well in this new position, nonetheless.

Driskel said that he’s always known that he could play at this level.

“I was impressed with Jeff, and really, we’ve been impressed with him every time he’s gone in a game,” said Bengals offensive coordinator Bill Lazor. “He’s poised.”

Jeff Driskel will be making his first NFL career start this Sunday. The Bengals will be hosting the Denver Broncos, another team sitting at 5-6 on the season. Driskel will look to turn things around for  Cincinnati who has lost three games straight and five of their last six.

With Dalton out for the rest of this season, it seems that fans will be seeing a lot more of Driskel in the near future.

It will be the Jeff Driskel show from here on out for the #bengals.