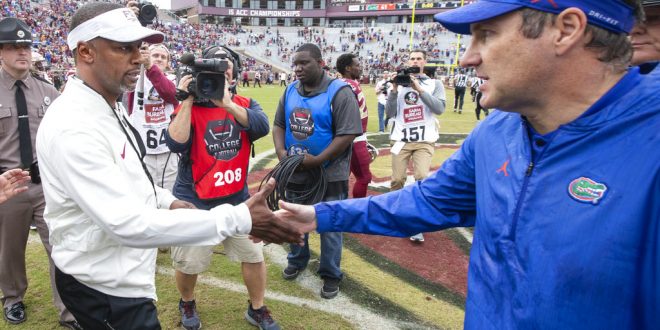 Two first year head coaches. Two completely different seasons. Dan Mullen and Willie Taggart are both living proof that discipline is the most crucial aspect to lead a successful team. However, Mullen finished his first regular season as head coach of the Gators with a 9-3 overall record. Meanwhile, Taggart failed to take his Seminole team to a bowl game for the first time in 36 years and a 5-7 record. You can blame their heartbreaking season on Florida.

The Seminoles have been dominating the Gators since 2013. Their first win was a 30-point blowout in Gainesville. Two years later, Florida only amounted to two points for the entirety of the game, losing 27-2 under head coach Jim McElwain. Once McElwain got fired, Randy Shannon took over as interim head coach and still managed to lose 38-22. At that point in the season, it was the fifth consecutive loss for the Gators and their regular season was done for with an overall record of 4-7.

As a result of the previous disappointing football seasons, Florida Athletic Director Scott Stricklin called Dan Mullen and insisted on his hiring to become the new head coach. That hiring has provided positivity and support throughout the fan base and the players themselves. Players like David Reese mention how “it feels great” after a huge win against FSU. “This time of the year is the playoffs. We were working hard all season and we are looking to win our bowl game.”

Redshirt junior Jordan Scarlett also showboated his enjoyment on the offense. He and Lamical Perine combined for 217 rushing yards against FSU and managed 537 total yards. The Gator offense has been able to put up over 500 yards for the third week in a row. Scarlett missed last year due to a season long suspension for credit-card fraud was missed throughout the 2017 season. He came up just shy of 100 yards against the Seminoles and he thanks the offensive line for that.

Van Jefferson transferred mid-year to Florida from Ole Miss due to Rebels’ NCAA sanctions. Jefferson had a great outing against the Seminoles. The Ole-Miss transfer provided four catches for 92 yards. Although he’s considerably new at the school, the Gator passion embodied his school spirit and he truly showed what it means to be a Florida Gator out on the field.

The Gators are most likely headed to a New Years’ Six Bowl game. Those bowls include the Rose Bowl, Sugar Bowl, Orange Bowl, Cotton Bowl, Peach Bowl, and Fiesta Bowl. However, the semifinals for the national championship game are played in the Cotton Bowl and the Orange Bowl, therefore the Gators are not eligible for that opportunity due to their three losses.

Recent grad from the University of Florida. Editing all articles on here while helping out the newbies. Love all things basketball.
@@MarcoJMartinez_
Previous Orlando Magic defeated by Kevin Durant’s Dominant Play
Next Florida’s Chauncey Gardner-Johnson Declares for NFL Draft