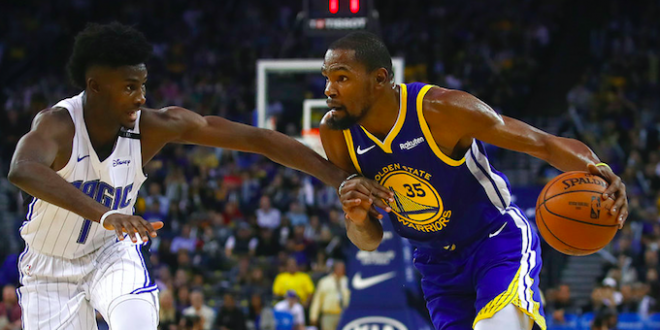 Forty-nine points, nine assists, six rebounds, two blocks and two steals. This is the stat line of Golden State Warriors’ leading scorer Kevin Durant in Golden State’s win Monday night against the Orlando Magic. Oh, and this is his tenth straight game leading the Warriors in points on offense.

On Monday night, Durant decided that he was not going to let his team lose at home. He, along with Klay Thompson, orchestrated an 18-point comeback to lead their team to a 116-110 defeat against the Magic.

Durant said that he could tell his team did not have the energy they needed to win this game. Durant contributed the success of his team to the players both on and off the court on Monday night.

This Warriors have now bounced back from their four-game losing streak as they mark Monday’s win as their third straight.

The Warriors went into the locker room trailing by 17 points. However, the Warriors second-half play dominated in the Oracle Arena to top the Magic.

Klay Thompson and Kevin Durant combined for 42 points outscoring the Magic 42-34 in the last 18 minutes of play, contributing 78 of the team’s total 116 points. Clearly, showing that even with Warriors Steph Curry and Draymond Green out, this team will still continue to dominate against opponents.

Kevin Durant (32) and Klay Thompson (31) combine for 63 points to fuel the @warriors win over POR at Oracle Arena! #DubNation pic.twitter.com/hLtuAv62MI

Only five points were contributed from other Warrior teammates during the entire fourth quarter. Durant and Thompson also scored or assisted on 53 of their team’s 69 points in the second half.

Durant’s Domination on the court

Durant has led his team in scoring for 13 of the team’s first 22 games this season. In the last 10 games, Durant has led the team scoring over 20 points. Golden State’s head coach, Steve Kerr said that Durant has put his team on their back and that he is a big reason for the team’s past three wins.

Durant is not just producing on offense but continues to make plays on defense as well when leading his team. This block contributing to the spark that the Warriors needed when trailing the Magic by 18 points.

Durant is averaging 29.2 points per game and 7.7 rebounds this season.

Next for the Warriors

The Warriors are 15-7 this season. The next team to take on the Warriors is the Raptors this Thursday with tip-off set for 8 p.m.

The losing streak continues as the Magic fell 112-96 to the Hawks Tuesday evening. Atlanta …