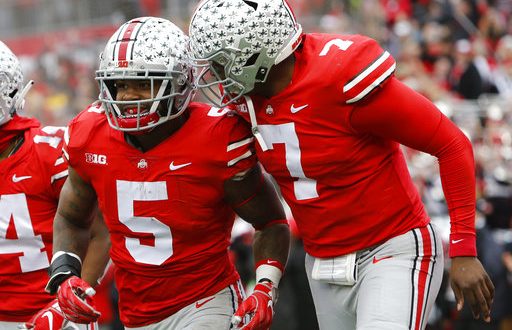 Ohio State Buckeyes are back in the playoff picture

It all comes down to Championship Week

After a convincing win over number 4 ranked Michigan, Urban Meyer and the Ohio State Buckeyes are back in the playoff picture.

With Alabama Clemson and Notre Dame basically locking down the first three playoff sports all throughout the season, the fourth playoff spot has been a mystery to college football fans. After defeating the Wolverines 62-39, Ohio State has a good chance of being selected for that fourth spot. The Buckeyes will go into the Big Ten championship game against Northwestern. Ohio State has an edge over Oklahoma, but winning the conference may not secure them a spot in the CFB.

“I’m extremely proud of our players, the way they’ve fought through it,” Coach Meyer said.  “And like someone was saying, nothing’s ever good enough. Obviously, we had some adversity earlier in the year — not some, but big-time adversity. And to come back against your rival and play like that. That’s a focused team that loves each other and cares about each other.”

Why Ohio State Over The Others?

Going into this weeks rankings, the Georgia Bulldogs are projected to jump to the number four spot. The Bulldogs can only hold that playoff spot with an SEC Championship win over powerhouse and projected champions, the Alabama Crimson Tide.

With a Georgia and Ohio State loss, Oklahoma is the favorite to grab the fourth spot in the CFB. However, they’ll have to face the Texas Longhorns again in the Big 12 Championship. The Sooners lost to the Longhorns earlier this season. When comparing both Oklahoma and Ohio State, one can make the argument that Oklahoma’s lost came from a better team (Texas) than Ohio State (Purdue). At the same time one can make the argument that Ohio State beat a bigger team (Michigan) than Oklahoma (West Virginia). The Buckeyes are a win and a Georgia loss away from basically clinching the last spot.

What happens if Alabama loses? Playoff Predictor's best guess is that the Crimson Tide will still get in. pic.twitter.com/whHTrAKNCp