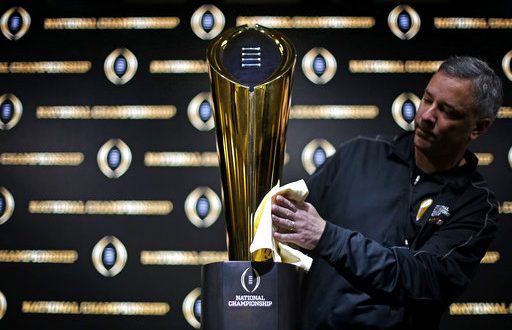 With the college football season quickly nearing its end, the Week 13 edition of the College Football Playoff rankings have been released.

Who’s In and Who’s Out

Spots one through three remained the same: Alabama, Clemson, and Notre Dame in that order. Those three all sit undefeated at 12-0 and have been the top three since the Week 10 rankings. However, there is a new club at the number four spot. The Georgia Bulldogs have moved into the final playoff spot, at least for now. The Michigan Wolverines, who now own the seventh spot, were in that final playoff spot last week until their loss to Ohio State. The Buckeyes beat the Wolverines handily by a score of 62-39. The Oklahoma Sooners jumped from sixth to fifth as a result of Michigan’s loss and now sit on the brink of the playoffs. Aside from the Sooners, the Buckeyes are another team looking to possibly make the jump into a top four spot.

The UCF Knights claimed their highest ranking of the season at number eight despite losing starting quarterback McKenzie Milton to a gruesome knee injury. The Florida Gators also sit at the highest ranking of their season at number nine.  The Gators have jumped from #15th to 13th to 11th to number nine over the last four weeks of the season. They are the highest ranked three loss team in the nation. The LSU Tigers fell to 10th after being ranked in the seventh spot for three consecutive weeks. The Tigers lost to Texas A&M in a 74-72 loss that went to seven overtime periods. It was the highest-scoring game in FBS history.

Much is at stake in one of the most important games of the season; the SEC Championship Game between Alabama and Georgia. For Alabama, a win means they will almost certainly keep the number one overall ranking. The Crimson Tide would still likely take one of the top four spots with a loss in this game, however. A Georgia win will clinch a spot in the playoffs but a loss will very likely knock them out of the top four. If the Bulldogs lose, then one of Oklahoma or Ohio State would be in line to claim their spot. The Clemson Tigers will try and clinch their spot in the Playoff against Pitt in the ACC Championship Game. Oklahoma faces a challenge in the Big 12 championship game against #14 Texas while number six Ohio State will try to keep their hopes alive against Northwestern in the Big 10 Championship Game.

ARE YOU READY, ATLANTA?!