Home / College Football / No. 1 Alabama looks to remain undefeated as they enter the SEC Championship 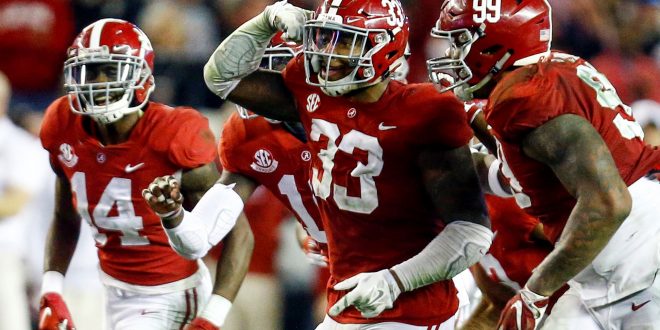 FILE - In this Saturday, Nov. 24, 2018, file photo, Alabama linebacker Anfernee Jennings (33) celebrates with teammates after an interception against Auburn during the second half of an NCAA college football game in Tuscaloosa, Ala. No. 1 Alabama's typically tough defense will be challenged by No. 4 Georgia's offense that enters Saturday's SEC championship game on a roll. (AP Photo/Butch Dill, FIle)

No. 1 Alabama looks to remain undefeated as they enter the SEC Championship

The rematch is finally here as No.1 Alabama Crimson Tide and No.4 Georgia Bulldogs meet on Saturday for the 2018 SEC Championship Game. The last time these two teams met was in the 2017 National Championships when Alabama won 26-23 in overtime.

Alabama has played an impeccable season, going 11-0. The Tide hopes to remain undefeated and win the SEC Championship Game to progress into the CFB Playoffs.

Quarterback Tua Tagovailoa has been the player to watch since the National Championship when Alabama captured the win over Georgia. Tagovailoa has been favorite among College Football and could potentially win the Heisman Trophy this year after an incredible season. Tagovailoa has completed over 70 percent of his passes with 36 touchdowns and only two interceptions this season.

Top NFL draft prospect Irv Smith Jr. has been a threat all season on Alabama’s offense. As a tight end, Smith has caught 35 of his passes with 613 yards and has scored seven touchdowns.

Alabama’s linebackers Mack Wilson and Dylan Moses are the duo to watch. Both Wilson and Moses have been announced as semifinalists for the Butkus Award. These two players are known to be the nation’s best linebackers in College Football and will pose a huge threat to the Bulldogs this weekend.

Alabama is known to have an astounding offense and a powerful defense, but the one thing that the Crimson Tide lacks is an impressive special teams. They not only lacks the ability to kick field goals, but the number of extra points that have been missed this season can have a large impact going into Saturday’s game. Alabama’s special teams need major improvement as their punting average has seen to significantly decrease this season. If Alabama hopes to win against Georgia, they cannot give away extra points and field goals.

Where: Mercedes-Benz Stadium in Atlanta, Georgia