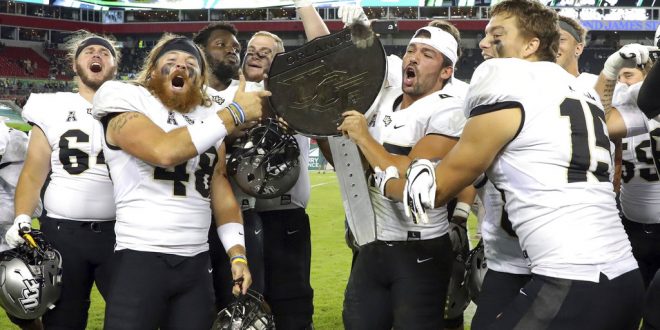 UCF is seeking their second straight American Athletic Conference championship, which would make the Knights eligible for a New Year’s Six Bowl bid and extend the nation’s longest winning streak to 25 games.

UCF is Playing for Milton

UCF is planning to distribute 40,000 Leis in honor of injured quarterback McKenzie Milton.

Milton’s injury happened during the second quarter of the UCF-South Florida this past Friday.

Milton got tackled low on a running play which led to him clutching his right knee after landing on the ground at Raymond James Stadium.

His family provided an update for fans who hope to see the support on Saturday.

Good Morning Knight Nation. Thank you for the out pour of prayers and well wishes ! KZ is in good spirits and has over come some hurtles already ! Today he is on line helping his team prep for Victory on Sat! Please not an empty seat ! Fill the Bounce house! Be There !

With Milton Out, Mack Jr. Steps Up To The Plate

UCF will turn to its backup Redshirt freshman Darriel Mack Jr., who finished the win over South Florida.

Mack will be making his second start of the season as he was 12-of-20 for 69 passing yards and 120 rushing yards along with a touchdown in his start against East Carolina.

Memphis started the season off slow with a loss against Tulane but the biggest matchup for UCF is against Darrell Henderson.

Henderson is at 1,699 rushing yards entering Saturday’s AAC championship game and has the AAC single-season record for all-purpose yards with 2,109.

Memphis will be trying to defeat the knights for the first time since 1990 at Spectrum Stadium.

Kickoff is slated for 3:30 p.m. Saturday and the game will be televised nationally on ABC.

You can also stream the ACC championship matchup on the WatchESPN app.