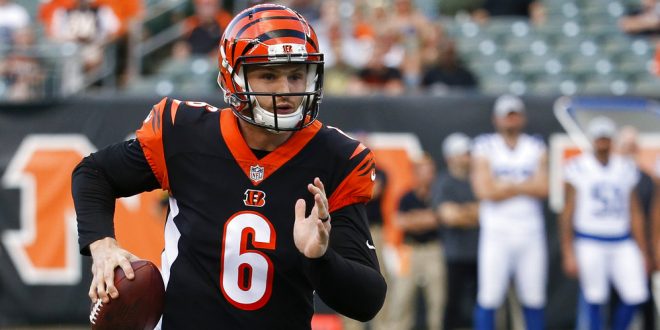 With quarterback Andy Dalton sidelined for the rest of the season with an injured thumb, Driskel gets the chance to try to pull the Bengals out of their meltdown starting with a home game against the Broncos on Sunday, Dec. 2, 2018. (AP Photo/Frank Victores, file)

The Denver Broncos and the Cincinnati Bengals both enter this game with 5-6 records with slim playoff hopes alive. The winner of this game could be back into the mix for the 6th seed in the playoffs.

Former Gator and current Cincinnati quarterback  Jeff Driskel will make his first NFL start in his career in a must win game.

The Broncos are on a two game win streak and will look to make it three following this game.  The Broncos’ running game has served them well in the past few games and want to keep it going. Facing a Bengals defense who has allowed 147.5 rushing yards per game, they should be able to find some lanes.

Since the trade of Demaryius Thomas, quarterback Case Keenum is still trying to find his second main target.

The defense will look to get after the Bengals especially with a new starting quarterback. Linebacker Von Miller will have a good matchup this week and will look to create havoc.

The Bengals enter this game on a three-game losing streak and will try to end it this week. The downside of this is they will be without their starting quarterback Andy Dalton and have Jeff Driskel starting. Driskel, a former Florida Gator, had some impressive plays last week and will look for more success in his first NFL start.

The good news for Driskel is he will have the Bengals’ best receiver in A.J. Green returning to the lineup. Bengals’ offensive lineman Andre Smith will also return this week. This will be important in slowing down the pass rush of the Denver Broncos.

However, most of Cincinnati’s problem is that they are giving up nearly 450 yards per game. They fired the defensive coordinator earlier in the month and have not shown much improvement. Head Coach Marvin Lewis will be challenged to get the defense ready, especially with a backup quarterback starting.

Only one loss out of the 6th seed, this matchup will be a must win for Cincinnati.