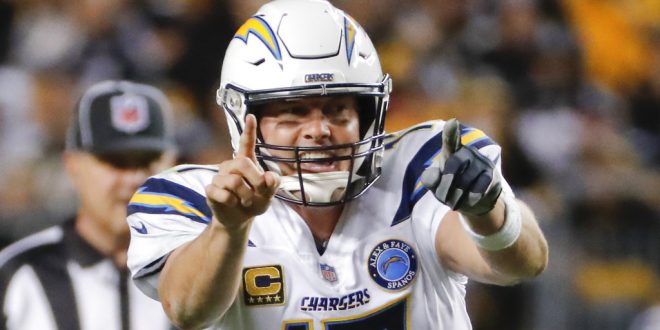 The under-the-radar Los Angeles Chargers are making a push for the playoffs and are on the tails of the Kansas City Chiefs. After a 1-2 start to the season, the 9-3 Chargers reeled off six straight wins and have climbed to second place in the AFC West.

A recent 33-30 win over the Pittsburgh Steelers on Sunday Night Football has them in a position to earn a trip to the playoffs for the first time since 2013.

Chargers Clicking In All Facets

Against the Steelers, Los Angeles put up 371 yards, including 286 through the air, and quarterback Philip Rivers threw for 299 yards and two touchdowns. On the ground, Justin Jackson ran for 63 yards and one touchdown giving them a 30-23 lead in the fourth quarter.

Rivers talked about the win and how it keeps them in the hunt in the AFC West.

On special teams, defensive back Desmond King had a 73-yard punt return early in the fourth to help the team pull even. They would go on to put up another scoring drive afterward.

Before the season, some writers predicted the Chargers to finish 10-6 and take hold of the AFC West. So far, they’re almost at that point with four games remaining. A home matchup against the Chiefs awaits in about two weeks. Will they still be overlooked?

“Under the radar” is what head coach Anthony Lynn likes. He commented on the team’s record and how they have to ignore the noise.

With running back Melvin Gordon out day-to-day, the Chargers will look to some of their other weapons on the ground. Despite any setbacks, they’ll look ahead to the rest of the month. Rivers talked about some of the opponents coming up on the schedule.