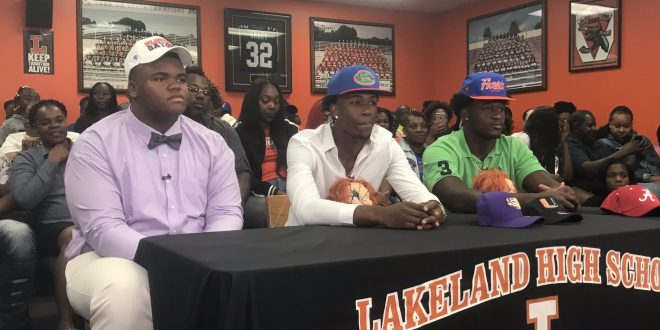 The Florida Football fax machine had its work cut out for it on a very successful Early National Signing Day. The Gators ended up receiving 20 letters of intent. However, the signing period technically isn’t over until December 21st; and though it’s unlikely, recruits could still commit to the Gators until then.

The Gators moved up a bit in the national rankings to score the 16th slot according to 247’s team rankings. Some fans are concerned because the Gators don’t have enough 4 and 5 star commits, but Mullen has told reporters that he’s not worried. He trust the analysis his coaching staff has done on the commits and has faith the recruits will pan out.

The biggest news for the Florida Gators today was when three high school teammates out of Lakeland; Deyavie Hammond, Lloyd Summerall, and Keon Zipperer all committed to play for the Gators.

Deyavie Hammond is a 4 star and the 12th ranked OG in the country according to 247 sports. He took his official visit to Florida this past weekend and he was believed to be considering both Florida and FSU.

After all three of the boys committed, Twitter went crazy with fans calling them “Gatornaughts,” which is a combination of their high school mascot the Dreadnaughts and Florida’s mascot the Gator. The term was first used when the Pouncey twins, Chris Rainey, Ahmad Black, Paul Wilson, Steve Wilks and John Brown committed to the Gators in 2007. Only time will tell if this new crew lives up to the Gatornaught name.

Jaelin Humphries a 4 star DT committed to the Gators Wednesday. Humphries seemed to be coming to UF, but never verbally committed. He took his official visit to Florida back in June and during the season the only team he unofficially visited was the Gators back on October 6th for the LSU game.

There was a few targets the Gators missed out on. Some of the guys who recently took OV’s that Florida didn’t get were;  DL Siaki Ika and CB Cordale Flott, who both signed with LSU. Also, Trey Sanders signed with Alabama and OG Dontae Lucas signed with FSU.

The Gators only have one verbal commit that didn’t sign Wednesday and thats Diwun Black. However, Black is planning on signing in February on National Signing Day.

The Gators next OV Weekend is January 11th. So far they have OT Ira Henry, SDE Smith Vilbert, and SDE Quashon Fuller all scheduled to visit.