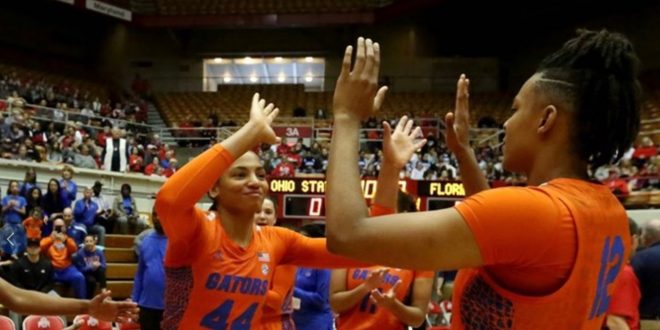 Florida prepares for Duel in the Desert

The Florida women’s basketball team is set to travel out west to compete in the Duel in the Desert tournament. The Gators will take on Utah for the first game and then, either UNLV or Hawaii for the second matchup. Duel of the Desert will mark the third trip Florida makes to a Las Vegas-based event; the Gators are 3-2 all-time in games played in the Silver State. This is the second time Florida will meet Utah in program history. The last contest was back in December of 1992 when the Gators defeated the Utes 57-51.

The Gators enter this matchup 3-7 overall after a tough 46-41 loss in Columbus against Ohio State on Sunday, ending their three-game winning streak. Florida’s defense held the Buckeyes to just 46 points–OSU’s lowest scoring game this season. And while the Gators held the lead for over 35 minutes, that was enough to stop Ohio State. However, during Sunday’s matchup, Funda Nakkasoglu made her return to the lineup putting in 14 points, including three treys. Delicia Washington has been consistent at crashing the boards, totaling at least 10 rebounds in the last four matchups.

The Utes come into the matchup undefeated

Utah enters this tournament 9-0, outscoring each of its opponents by at least 1o points. This will be the second SEC opponent the Utes will face this season. In November, Utah defeated Alabam, making it the fifth win against an SEC team in the program’s history. Utah has had a remarkable season so far with fantastic talent on the team. Eight of their 10 eligible players have reached double digits at least once this season. Dre’Una Edwards will be a key player to look out for during Thursday’s matchup. The 6-foot-2-inch freshman has had four double-doubles this season. Edwards’ four double-doubles are tied for first among freshmen in the Pac-12.

In addition, Utah is ranked first the Pac-12 in steals, averaging 11.4 steals per game.

Utah is coming off a hot win this past Saturday, as the Utes trounced the Weber State Wildcats 77-56. The Utes dominated at crashing the boards, outrebounding the Wildcats 42-24. Senior Megan Huff led the team scoring 23 points, while Edwards chipped in with 19 points. Junior Kiana Moore and redshirt-freshman Jordan Cruz combined to score 4-of-6 from beyond the arc against Weber State coming off the bench. In fact, Utah outscored the Wildcats 20-6 in bench points.