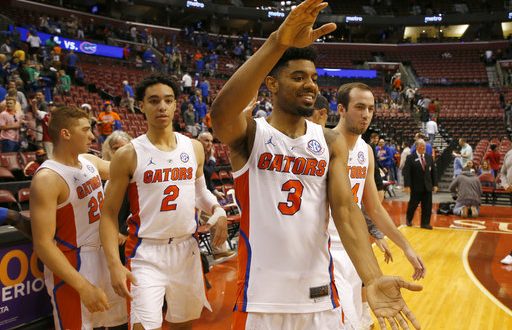 Guess who’s back, back again.

Jalen Hudson’s back, tell a friend.

After four lackluster showings, Gators senior guard Jalen Hudson returned to form in a big way. He posted 14 points, one short of tying his career high, and added 6 rebounds in the team’s 77-56 win over Florida Gulf Coast in the metro by T-Mobile Orange Bowl Basketball Classic Saturday evening in Sunrise. This bounce-back performance led to Hudson receiving MVP honors.

Hudson served as the early spark plug Florida needed to gain control of the game.

The Gators held a slight 14-8 advantage over FGCU early in the first half. Hudson found his stroke hitting his first three-pointer since the team’s win over North Florida back on Nov.27, almost a month between made threes. He would get his second three of the evening a few minutes later. Hudson wasn’t done, as he hit his third straight three to give Florida a commanding 23-8 lead. Hudson’s sharp shooting helped the Gators pull away with a 13-2 first-half run.

Hudson would be the team’s leading scorer after the first half.

Getting off to an extremely disappointing start to the season offensively can do damage to any players confidence. For Hudson, the key to snapping his personal cold spell was all about keeping his confidence high.

Hudson said his coaches and teammates instill confidence in him. When he has it going offensively, it has a trickle-down effect on his teammates.

The two shared a high five after Locke’s answer.

During Hudson’s struggles, there was no special rallying message from Gators head coach Mike White.

Hudson was a force to be reckoned with on both sides of the floor Saturday evening.

He was crashing the boards at a high level by pulling down six rebounds, the second most on the team for the night.

One of his six rebounds led to points. After a Keyontae Johnson missed free throw in the second half, Hudson was right there with the board and put back. This extended Florida’s ever-growing lead to 52-29.

While many would say Hudson’s statistics were the most impressive part of his MVP performance, White was more impressed with Hudson’s performance on the defensive side.

With Saturday’s win, Hudson and the Gators have rallied off four wins in their last five games after starting the year 3-3. They’ll have one more non-conference matchup before jumping into SEC play as the calendar changes to 2019. Florida returns to the Exactech Arena for a rematch with Butler Dec. 29. The two met in the Battle 4 Atlantis in November with Butler winning 61-54.