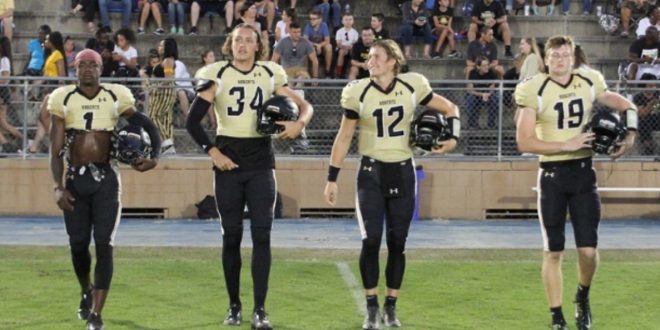 The Legacy of the Whittemore’s at Buchholz High School

In 1990, the legacy of the Whittemore family at Buchholz High School began.

Then a wide receiver at BHS, Mark Whittemore helped lead the Bobcats to the 1990 4A Florida State Championship, defeating Dillard 24-7. The victory delivered Buchholz their first and only state title in football.

“I used to watch his highlights and everything,” Trent Whittemore said of his father. “He motivated us a lot to go and try to play college football.”

Trent, now a senior on the Buchholz football team, is the second oldest son of Mark and Missy Whittemore. The two have been together since the mid-1990s and together have called Gainesville home ever since.

The continued success of the Whittemore’s on the football field began with Luke. After a stellar career at BHS, the stocky wide receiver accepted a scholarship from Troy University in Louisiana. Luke is currently a redshirt-freshman on the team.

Trent followed in his brother’s footsteps. He also plays the wide receiver position, as well as defensive back, and has been a three-year starter for the Bobcats on the varsity team. His abilities on the football field have earned him a three-star prospect rating and landed him a scholarship from the University of Florida to continue his football career.

Both Luke and Trent got their passion and love of football from their father. Mark Whitmore attended BHS between 1987 and 1991 after moving to Gainesville from Belle Glade, Florida. Following his high school career, he attended the University of Central Florida to play football.

After a brief stint as a free agent in the National Football League, Whittemore returned home. In 1996, he accepted a job at Buchholz to teach history and became an assistant coach for the football team.

After 16 years of being an assistant, Whittemore took over head coaching duties in 2012. Under his leadership, he has guided the Bobcats to a combined 43-35 record over seven seasons.

For all but one season, 2012, Mark has had at least one of his sons on the team with him. Luke played for his father from 2013 to 2016 while Trent began his career in 2015 and finished his career as a Bobcat football player this past season.

“I think my dad has definitely left a legacy here,” Trent said. “He’s won a state championship as a player and won two district titles as a head coach, you know and we’re looking for a third, so I think he’s definitely someone who’s made his mark on Bobcat history. Me and my brother (Luke) just tried to play hard and leave a legacy.”

Aggertt was a standout volleyball player for the Gators between 1992-1995. Her number 19 jersey hangs from the rafters of the Stephen C. O’Connell center as it was retired during her final home game as a senior.

Currently, Missy works for the SEC network covering volleyball and does work for ESPN as well.

If Mark and Missy’s sons got their athleticism from both their parents, they certainly got the height from their mother. Both Missy and Mark are 5-feet, 9-inches while both Luke and Trent stand at over 6-feet tall, with Trent standing at 6-feet, 3-inches. Creed and Andrew are expected to grow equally as tall.

The height that Trent has received has not only helped him on the football, where he is a two-time all-state player but on the basketball court as well. Buchholz Athletic Director George Atohi said that Trent is the best basketball player in Alachua County. Trent has also been named to the all-state basketball team the last two seasons.

While the Whittemore family has shined on the athletic stage, what they have done off the field and the court stand’s out even more.

Atohi is in his first full year as AD at BHS. He said he’s known Mark and his family for a long time and it has helped ease him into his new position at the school.

“I’m lucky to have him,” Atohi said of Mark Whittemore, “and I’m lucky I knew him before I had this job on a personal level.”

According to Atohi, the Whittemore’s are incredibly active in local churches and do a lot of work in the community.

Mark and his family practice at the Calvary Chapel, a non-denominational Christian church. He said his family places a high priority on fellowship and serving others in the community.

“Over the years, that’s been a huge part of our week,” Mark said.

Not only is Mark the head football coach at Buchholz High School he is also a teacher. He teaches AP US, honors and American history at the school and has done so for the same amount of time he has been coaching at BHS. He said that he has always loved history and the subject is intriguing to him.

The two-time district champion coach is just as passionate about teaching as he is coaching. He said that he’s very 50/50 on which of the two he enjoys more.

Giving back to others is evident in Marks work. Coaching and teaching provide services to younger generations, not only athletically and academically, but with life skills as well. He takes pride in the fact that he is able to coach and teach at the high school he went to and have the opportunity to teach his own kids as well.

With this being Trent’s senior year, it looks like he’ll finish with all A’s as well. Aside from being an excellent student and a superb athlete, Mark said what he admires most about his second-oldest son is his humility. He said that Trent is a humble kid and it’s incredibly admirable given the amount of success he has had in his life.

When attending the University of Florida, Trent will be studying either Telecommunications or Political Science. If he goes the telecommunications route, he’ll be following in his mom’s footsteps.

Being able to accomplish this much at Buchholz High School is very important to the Whittemore family. For Mark, it means continuing to make an impact at the school he attended and won a state title at. For Trent, it means carrying on the legacy of his family and being successful at the school his dad attended, and then again at the University of Florida where his mom received both her bachelors and master’s degrees.

Mark put it best when describing what BHS means to him, his wife and his sons.

“Buchholz is truly home for the Whittemore family.”

Previous Get Your Head Out of the Game? Player Safety Movement Makes Its Way to High Schools
Next The UF Concussion Center Has Helped Shape How Teams Practice

In front of a sea of pink at the Stephen C. O’Connell Center, the fourth …