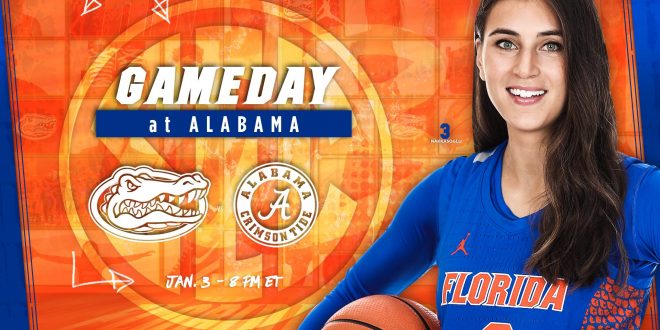 Gators Begin Their SEC play on the Road in Alabama

The Gators women’s basketball team, who is coming off an impressive home win against Charleston Southern, returns on the road to begin their SEC schedule.

The Gators are opening up their SEC play today in Alabama against the Crimson Tide, after coming off their 4th home game of the season against Charleston Southern, 70-60.

This past Sunday ended their non-conference schedule, but the Gators get right back on the road to handle business to start their 2019 season.

Funda Nakkasoglu, who had an impressive 30-point-game against Charleston Southern, leads her team in scoring and has stepped up immensely since coming back off an ankle injury.

Zada Williams followed behind her senior teammate with a career-high 18 points for the season. Zada has really been stepping it up for the Gators, finding her groove in the line-up since the beginning of the season by averaging 12.3 points in the last six games.

The Gators had three upper-classmen in double digits last game combining for 61 out of the 70 points. These were the only 3 Gator players to score a field goal in the entire game.

The win over Charleston Southern was one for the books.

Going into this game the Gators have a very high offensive tempo shooting 87 percent from the FT and having 28 points in the paint in their previous matchup.

The last time these two teams met was in Gainesville last season where Alabama defeated the Gators in their home opener.

Tables turn and the Gators are being hosted by them in the start of their SEC play. The Gators have won on the road in Alabama before.

The Alabama Crimson Tide also finished their non-conference play themselves taking a tough loss to the Miami Hurricanes 101- 74 in their last game of 2018.

This will be Alabama’s SEC home opener hosting the Gators. They enter this match up 8-5 for the season.

The Lady Tide are led by head coach Kristy Curry. They have three players that are averaging double digits for the season so far, this includes Jordan Lewis, Cierra Johnson, and Jasmine Walker.

These two teams will expect a very high tempo game and will have to battle it out, giving that Alabama leads SEC in rebounding, but Florida had a 40 rebound game in their last match.

Tip-off for tonight’s game is set for 8 pm.

The Gators will return home to continue their SEC schedule on Sunday hosting the Auburn Tigers.