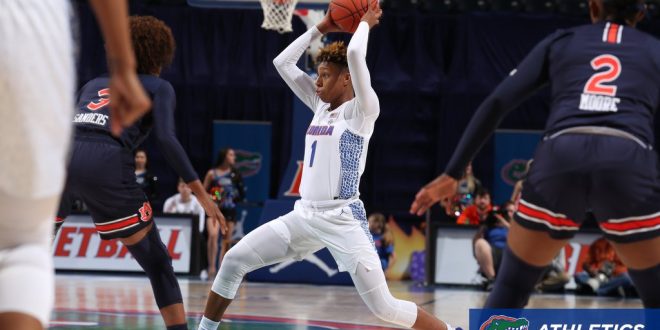 The Florida women’s basketball team falls to 0-2 in the SEC after losing at home to the Auburn Tigers 64-56 Sunday afternoon.

Despite the Gators winning only four of their 15 total games, all four of these wins have come on their home court over the last month; they have not lost a game at home since November 28th.

Unfortunately, this home court momentum did not help the Gators as they looked for their first SEC win of the 2018-2019 season.  The Gators shot well from the 3-point line and managed to take a lead into halftime, but it was not enough to keep their luck at home alive.

Although this was the first loss at home in over a month, Cam Newbauer’s team found some positive takeaways to drive them through the rest of the season.  Sophomore guard Kiki Smith found her confidence in yesterday’s game finishing the game with a career high 15 points, with nine of these points coming from behind the arc.

Funda Nakkasoglu also ended the game in double-digits for the 11th time this year after draining 3 three-pointers in key moments throughout the game.  Finally, this was the fifth straight game that the Gators managed to compile 10 or more assists against their opponents.

However, even with their balanced offense and ability to hold Auburn to only 64 points, the Gators ultimately fell short to the Lady Tigers. The Tigers mounted a huge third quarter with 23 points compared to the Gators 13.

Most of the Tiger offense came from Gainesville native, Janiah McKay, who finished the game with 16 points.  McKay was joined by teammate Daisa Alexander, who also ended the game in double-digits finishing with 22 points.

The Gators have started SEC play 0-2 and face a very tough South Carolina team in Columbia on Thursday.

The Gamecocks are on a six-game win streak and are ranked as well.