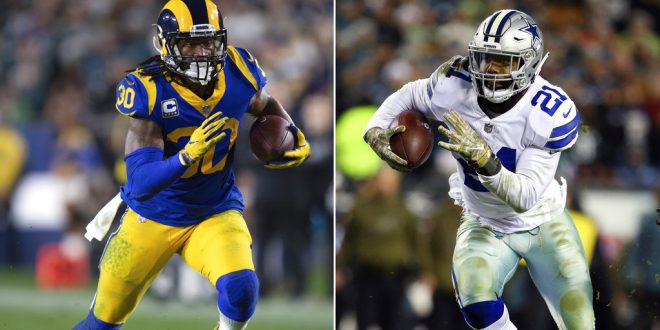 The Dallas Cowboys will be in Los Angeles on Saturday to take on the Rams in the first game of the NFC Divisional Round.

Dallas (11-6) is coming off a 24-22 victory over the Seattle Seahawks last weekend in the wild card. Los Angeles (13-3) had a first-round bye and is hosting a playoff game for the second consecutive year.

This matchup will feature the Rams’ high-powered offense and the Cowboys’ stout defense facing off against one another. Both teams also have elite running backs that are vital weapons for their offenses.

Although they won’t be on the field at the same time, Ezekiel Elliott and Todd Gurley will be two players to pay attention to.

Gurley missed Los Angeles’ final two games of the season, but has been a dominant force for his team. In just 14 games, the former Georgia Bulldog rushed for 1,251 yards and averaged an impressive 4.9 yards per carry.

He also led the league with 17 rushing touchdowns and hauled in four receiving touchdowns. Plus, Gurley’s ability to run and catch out of the backfield will present problem’s for Dallas’ defense on Saturday.

Elliott finished the 2018 regular season with 1,434 rushing yards, which led the National Football League. He claimed the second rushing title of his career, with the first one being in 2016 as a rookie.

The former Ohio State running back is also a dual-threat player as he caught 77 passes for 567 yards. For Elliott, this game will be more about the teams than himself and Gurley:

A Battle of Two Strengths

One of the most interesting aspects of Saturday’s matchup will be the Rams’ offense versus the Cowboys’ defense.

Los Angeles is lighting up blue for the #pLAyoffs! pic.twitter.com/xbKjXAcpbV

Los Angeles put up the second-most total yards in the regular season and averaged close to 33 points per game. Their offensive attack was led by Gurley and quarterback Jared Goff, who put up strong numbers in his third NFL season.

Goff was fourth in the league with 4,688 yards, threw for 32 touchdowns and completed nearly 65 percent of his attempts. Head coach Sean McVay praised his young signal caller for not letting outside distractions affect his performance:

Matching up against the Rams’ offense is the Cowboys’ defense, which has been one of the best in the NFL. The group gave up just 20.3 points per game and allowed 329.3 total yards per game as well.

Against Seattle last Saturday, Dallas held the Seahawks to 73 rush yards on 24 carries and kept the passing game relatively in check. With Los Angeles being able to win in the air or on the ground, the Cowboys will be in for one of their toughest tests of the season.